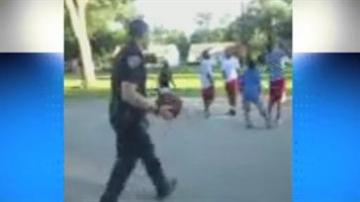 SOUTH BEND, Ind. -- Hundreds of people have watched the video on Facebook showing a South Bend Police officer joining a pickup game of basketball at Coquillard Park. The 19-year-old who recorded the video said he wanted people to have a positive opinion of the police.

Kids play basketball at Coquillard Park all the time. It's rare that a police officer asks to join the game.

"And he was like he wanted to play. He got to playing all the kids one on one," said Charlie Easton.

Easton says he started recording because he was so surprised.

When Easton uploaded his video on Facebook, several hundred people shared it and sent him messages saying how great it was.

"I'm going to put South Bend on the map. I wanted to record him and put in on Facebook so everyone could see that South Bend cops aren't that bad either," said Easton.

The officer in the video is Officer Robert Anton.

We showed his boss, Captain Jeff Rynearson, the video. He hadn't seen it before.

Rynearson said he was glad his officer made the basket and he also said it was a perfect example of what an officer should be doing.

"In this instance, this a group of kids that maybe down the road will have information or be a witness to something or at least know of an issue in that area and now they're not afraid to approach officer Anton down the road," said Rynearson.

Easton says all it took was one pick-up game and one nice officer to make him want to wear the uniform himself.

The kids at the park said Officer Anton did pretty well and he is welcome back anytime.