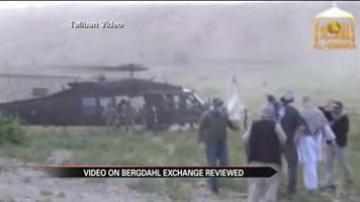 Bergdahl can be seen sitting in a truck with local dress and no beard.

Taliban fighters were standing on a hillside watching.

As American military helicopters approached, Bergdahl was warned to not come back again or he will not make it out alive.

Once the Blackhawk landed it took just 90 seconds for Bergdahl to fly to freedom.

The Obama Administration said the focus now is on Bergdahl's health, but that has not stopped questions from lawmakers and fellow soldiers.

"I hope that when he's fit that he stands trial by court-martial. And if the judges rule him not guilty or guilty or they give him a punishment, I'll respect whatever decision they hand down on him," said Gerald Sutton who served in Afghanistan with Bowe Bergdahl.