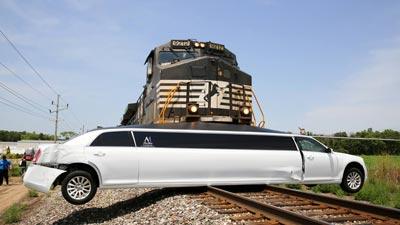 A video posted by Noe Productions shows a limo getting struck by a train at CR 29 (West Lincoln Street) east of SR15 in Elkhart County on Saturday.

The video shows a man trying to signal the Norfolk Southern train, then the train striking the limo.

It takes almost a minute for the train to stop.

The photographer then runs to the front of the train and shows the aftermath.

The man who recorded the video was in the vehicle behind the limo.

The limo was carrying teens to a sweet 16 party. It had bottomed out on the track.

Another vehicle got stuck at the exact same location 11 days ago.

Douglas Pyle owns a business across the street from where the collision happened.

David Pidgeon, a spokesman for Norfolk Southern railway urges drivers to be careful.

“Please don't go around crossing. You’re putting your life and the lives of the passengers in danger. It’s not worth someone's safety or their life to try to beat a train at a crossing,” said Pidgeon.

No one was injured in the accident, according to the Elkhart County Sheriff's Department.

The sheriff's department says the driver was not impaired.