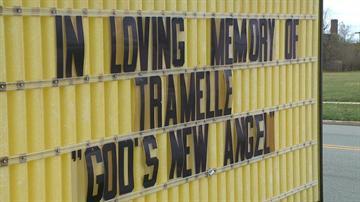 SOUTH BEND, Ind. – Tears, prayers and sobs filled the air as residents of West Washington Street gathered on Wednesday to hold a vigil for 10-year-old Tramelle Sturgis.  Tramelle was beaten to death late Thursday night or early Friday morning last week, police have accused his father Terry Sturgis of killing him and hospitalizing his 14-year-old brother.

“He (Tramelle) was kind of a quiet young man,” described Pam Bryant, who works at the R & M Snack Shop near the Sturgis home.  “He (Tramelle’s 14-year-old brother) was jokey, always wanting to joke around and that kind of thing, he seemed like he was a pretty good kid.”

Bryant explained that the young child’s murder shocked the neighborhood.

“They have just been in awe of all this stuff, they can’t imagine how a parent could do that to a child,” Bryant explained.  “My heart is heavy with sadness.”

But, the tragedy has brought the community together.  Bryant helped organize Wednesday’s vigil along with children from the neighborhood.  Since Tramelle’s death, R & M Snack Shop has had a donation jar on their counter to go towards the Sturgis family.

“Everyone who has come in has donated something,” Bryant explained.  “It makes me feel good that people have come in and given so wholeheartedly.”

The outpouring of community support didn’t just come from the people of Washington Street.  Jeremie Lawson doesn’t live on the street, but volunteered to help setup the vigil.

“My son went to school with him every day in third grade, so he saw Tramelle almost every day, he’s pretty broke up about it,” Lawson explained.

Lawson was on a trip in Alabama when news of Tramelle’s murder broke.  His son called and asked him to come home, so he flew back to South Bend.

“He wanted me home, a family member bought me my flight ticket and I got here and God laid this on my heart to do the work,” Lawson described.

Dozens of people from across South Bend gathered outside the Sturgis home placing flowers, stuffed animals and balloons along the fence in front of the house.  Tramelle’s grandmother came out to thank the people and accept the donations from the neighborhood.  Tramelle’s mother was also at the vigil but was too emotional to speak to the crowd.

“It’s hard enough for us to deal with it, can’t imagine what the family’s going through, I can’t imagine,” Jeremie Lawson explained.

While people in the neighborhood hoped to help the family heal, many also hoped the community would learn from Tramelle’s story.

“Domestic violence is very, very, very much hidden and we need more education to look for warning signs,” Lawson explained.

Education that will, unfortunately, come too late to help Tramelle Sturgis.

“Everybody wishes now that they had seen some of the signs,” explained Pam Bryant.  “It seems like it always takes a tragedy for people to stand up and do something about it sometimes.”

Terry Sturgis, Tramelle’s father, is in the St. Joseph County Jail on two charges of battery and one charge of murder.