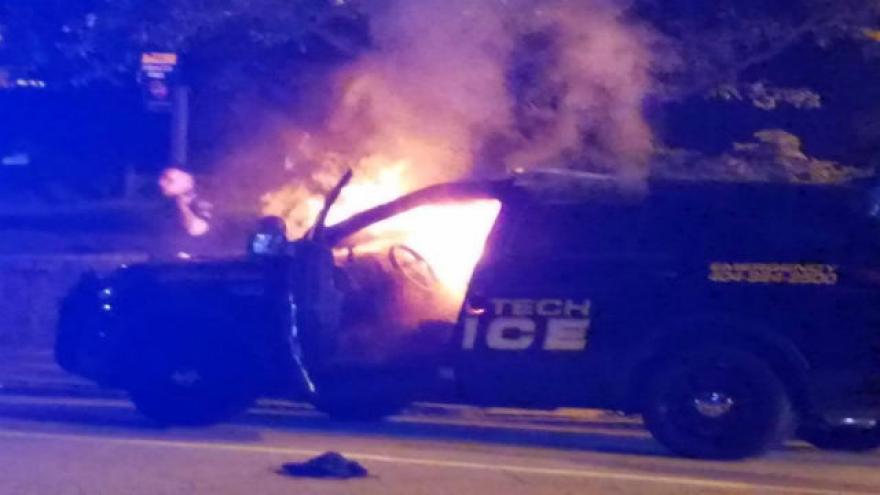 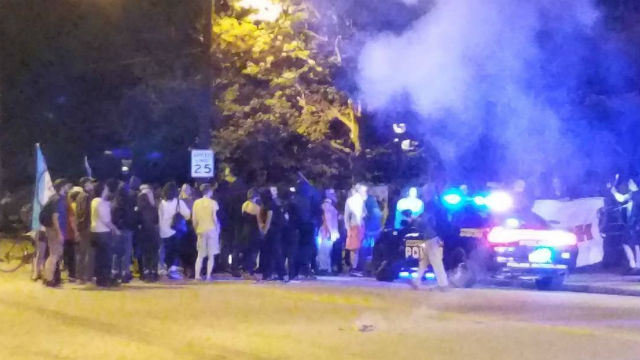 (CNN) -- Violence erupted late Monday on the campus of the Georgia Institute of Technology in Atlanta after a vigil for a student shot and killed by police.

Attendees at the vigil for Scout Schultz said that gathering ended quietly after less than half an hour, and about 20 minutes later a separate gathering developed with chanting, marching and, ultimately, confrontations at the campus police headquarters.

A campus police car burned after its windshield was smashed, and videos taken by people at the scene showed police handcuffing individuals who had been forced to the ground.

Georgia Tech said in a statement late Monday that about 50 people had marched to the police station. Three arrests were made and two officers received minor injuries. Those arrested were charged with inciting a riot and battery of an officer, Tech said, although it did not say whether the three were students.

The later demonstration began with a "core group" of about a dozen people chanting "This is not OK" and unfurling a banner that read "Protect LGBTQ," according to Xincheng Shen, a doctoral student at Tech who attended the earlier vigil.

Schultz was a leader in the school's LGBTQ community.

Demonstrators also chanted, "Justice now," and marched around part of the campus before heading to the police headquarters.

"I realized this was going to be very bad" when the protest group headed toward police headquarters, Shen said.

Fireworks went off but it was not clear who set them off, he said. A person from the group jumped on the hood of a police car parked near the station and the windshield was smashed.

Video on social media from the scene shows the police car ablaze and demonstrators -- some with their faces covered with bandanas -- confronting police who were making arrests.

Two people who ran past Shen had their faces covered with bandanas and were carrying what appeared to be "tools," he said. "One of them was carrying what looked like a pipe."

More police arrived on the scene.

"I saw a couple of students forced to the ground handcuffed. Police were not arresting everyone," Shen said. "They were only after certain people."

Georgia Tech police had urged students to stay inside and lock their doors because of "violent protests on campus."

Hours later, university said the campus was back to normal -- Shen described it as "eerily quiet" -- and that classes would resume as scheduled Tuesday morning.

Schultz, a fourth-year computer engineering student at the school, was shot Saturday night after police responded to a 911 call at 11:17 p.m., with the caller reporting a suspicious person on campus. The caller said the person -- described as a white male with long blond hair, white T-shirt and blue jeans, possibly intoxicated -- was holding a knife and possibly a gun.

The Georgia Bureau of Investigation said Schultz made that 911 call.

Cell phone video shows the officer repeatedly yelling at Schultz to put the knife down and not move. In the video, after Schultz takes a few steps forward, an officer opens fire.

Three suicide notes were found in Schultz's dorm room, the Georgia Bureau of Investigation said. No gun was found at the scene and the only knife found was one inside a multipurpose tool, the GBI said.

Earlier on Monday, family attorney L. Chris Stewart said Schultz was barefoot and "disoriented," in the middle of a "mental breakdown." Stewart also accused the officer who opened fire of overreacting.

He also accused the school of pushing a narrative that Schultz was a "knife-wielding" threat despite evidence suggesting otherwise.