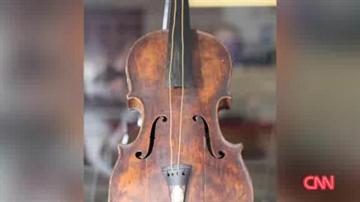 (CNN) -- It may be one of the most-famous violins in history. An instrument played by one of the musicians on board the ill-fated Titanic fetched quite a price at auction over the weekend.

This violin once belonged to a musician named Wallace Hartley.

If the name's unfamiliar, you'll know the ship he sailed on. Hartley was the bandleader of the Titanic.

That's the reason why the instrument fetched $1.7 million at auction Saturday in England.

Unlike many other Titanic artifacts, the violin didn't fall to the ocean floor.

Historians believe it was strapped to Hartley's body when it was pulled from the water, days after Titanic sank.

It turned up in an attic in Britain seven years ago.

What helped identify it was an engraving from Hartley's fiancee: "For Wallace on the occasion of our engagement, from Maria."

The violin was returned to her after the shipwreck.

To be fair, other historic violins have gone for more;

This violin is one of many Titanic artifacts, including others from Wallace Hartley, to come up for auction.

It may be the most symbolic, though.

It tells a story that is at once a romance and a tragedy.

This is to believed to be the instrument Hartley played as the ship sank into the icy Atlantic.

It's not playable, and may never be again.