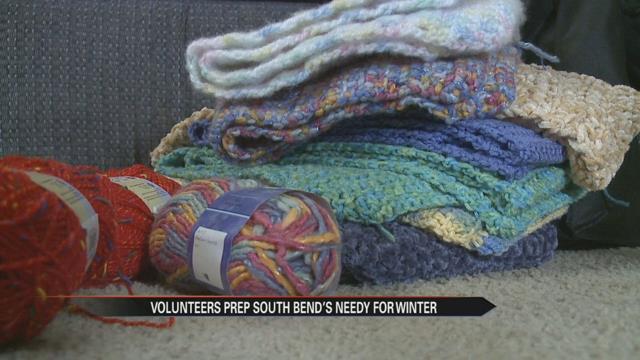 Wednesday night volunteers brought a nationwide initiative to keep the needy warm to Michiana. Their method is not traditional as they decorated trees and light posts throughout South Bend with winter accessories like scarves.

For the past two weeks group organizers Whitney Nickel and Beatrice Pedraza have collected donations from volunteers like Sharon Banicki.

Nickle and Banicki say family values are the reason they are giving back.

“It takes about two hours,” says Banicki as she describes how long it takes to crochet one scarf.

But for Banicki the more time the better.

“Well my dad has been ill. So to spend time with him I’m here at the house with him,” says Banicki.

Banicki’s father has stage four lymphoma and while caring for him crocheting is the perfect pastime.

“And it’s comforting and peaceful for both of us,” says Banicki.

Banicki heard about a local group looking for scarves to start a new movement in South Bend. She got to work and crocheted a dozen scarves.

“People we don’t even know volunteered to knit scarves and we just had someone donate over $100 worth of winter items,” says Nickle.

Within two weeks Nickle was able to organize 40 plus community members to join the movement she calls ‘Keeping Our Neighbors Warm.’

“I think the last couple of winters we all know that it is not a fun time and so this is just a simple way to show people we care especially during the holidays,” says Nickle.

Close to 50 people went out into the community tying scarves and other winter gear to trees and light posts for any one in need to take and keep them warm.

“And that is really exciting because it shows that our community really does care,” says Nickle.

Nickle says the community’s involvement is an example of families trying to help other families. A lesson she grew up with.

“I grew up in a family that giving back was very important. I want to pass that on to other people," says Nickle.

And to keep her father's goodwill alive, Banicki would like to do the same.

“My dad taught me to give back as much as you can. He is the kind of guy that would give you the shirt off his back and the last nickel out of his picket so to carry on what he has taught all of us children makes me feel good,” says Banicki.