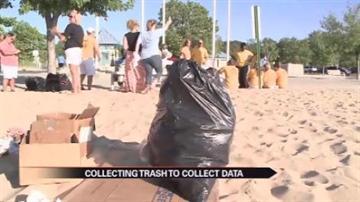 Volunteers marched through the sand, on the lookout for trash left behind by beachgoers.

It's a sight that's become more common along the shore of Lake Michigan in recent years.

For Nicole Kirksey, it's frustrating, but rewarding, all the same.

She works for Alliance for the Great Lakes, a environmental group, collecting data on the trash found. From there, those numbers get posted online so she and others can petition people to make some lifestyle changes.

"Without having that data, they don't know where to go, or where to begin," Kirksey said.

"It's kind of good to have a track of it, so you won't forget," Emma Schlaack, a volunteer, said.

She's only 9-years-old, but volunteers because she doesn't want to play in dirty sand. She's hoping St. Joe's Silver Beach will still be clean and in good shape when she grows up.

"It'll be more prettier when there's no trash around, and then it'll be a more happier place," Schlaack said.

The trash collected Wednesday night will most likely be replaced with more in just a few days.

Still -- group organizers said their efforts have helped. In the past few years, they've convinced city and state governments to enforce and create tougher litter laws.

"It'll be back, but I see the changes that are being made, and I don't feel like it's a never-ending battle," Kirksey said.