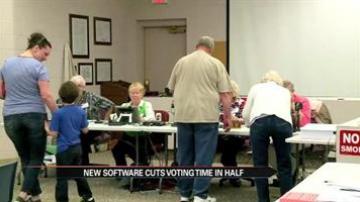 ELKHART COUNTY, Ind. -- Voters and poll workers were very positive about their experience with the new vote centers in Elkhart County. It was the first time the county used vote centers instead of assigned precinct locations.

It was also the first time they put new voting software to use that was designed to make the vote centers faster and easier.

Because of electronic poll books, poll workers in Elkhart County didn't have to flip through huge binders full of the voter rolls.

"It was much faster than the old way of them having to look through the registration and find your name. They just push a button and you're finished instead of having to feed it through the machine, so it was a lot easier," said Elkhart County voter Corinne Reed.

"I like it very much. It's very efficient and fast," said Elkhart County poll worker Nila Kenny.

Voters were in and out in half the time it takes to cast a ballot the old way.

"I would say less than five minutes," said Reed.

Although some voters say they had reservations about the switch, poll workers say they hope the speed and convenience encourages more people to vote in November.

"We had a lot of people who were apprehensive about it because it was computers, but they seem to be the ones coming back telling us that they like the system," said Kenny.

"Don't be intimidated. It's really easy. It's a lot faster than it used to be," said Reed.

Election officials said other than a few technical glitches in the morning, voting went smoothly.