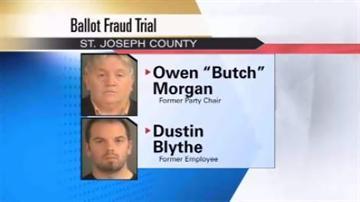 ST. JOSEPH COUNTY, Ind. -- The trial for the former Democratic Party chairman and a former staff member got underway Tuesday. Butch Morgan and Dustin Blythe face a total of 14 counts of voter fraud and forgery stemming from the 2008 presidential primary.

Both men are accused of forging signatures to get Barack Obama and Hillary Clinton on Indiana's 2008 primary ballot.

Former voter registration workers Pam Brunette and Beverly Shelton who are also charged in the chase have already pleaded guilty to forgery charges.

Lucas Burkett, 27, who used to work in the voter’s registration office back in 2008, testified that Morgan came up with the plan to forge signatures and made the staff do so during their lunch hours and at home as homework.

Burkett said on the stand that after close to a week of doing it, he decided it was illegal and refused.

Burkett also testified that after he refused to forge signatures for the presidential primary ballot in 2008, he didn't speak about it again until 2010 when he ran into his old  classmate Andrew Jones at a wedding. He said the two both graduated from Adams High School in 2004 and were both on the Mock Trial Team.

Burkett claimed he was too scared to go to the police on the matter because he said Morgan told him the county's prosecutor, Mike Dvorak, and Morgan had worked out a deal for Burkett to avoid felony prosecution on an unrelated case of ghost employment. He said in October of 2008 Morgan told him in order to avoid prosecution he would have to submit a resignation letter and resign immediately from his voter registration job, which he did.

Burkett was was intensely questioned by the prosecution and defense for close to two hours. He told the defense he didn't go to police on the forgery situation because he was fearful the ghost employment charges could possibly surface.

Dvorak also testified Tuesday. He said he never worked out a deal for Burkett with Morgan for Burkett to avoid ghost employment charges .

Last year when he heard that his name was involved in this case, his office filed charges against the suspects and he requested a special prosecutor be brought in. Atty. Stanley Levco of Evansville is currently prosecuting the case.

It wasn't until last April that voter fraud charges were filed on Morgan and his other three staff members.

Brunette and Shelton are expected to be called to testify in court Wednesday. Trial resumes at 10 a.m.