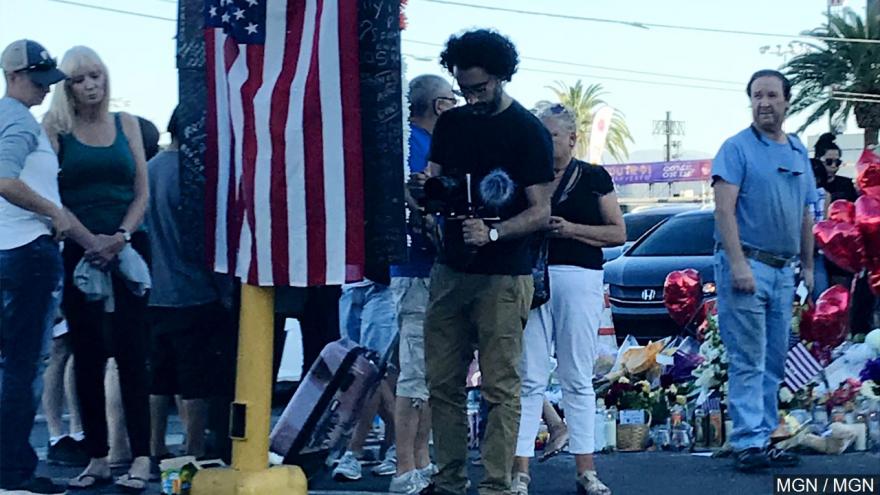 (CNN) -- Vice President Mike Pence offered prayers and words of comfort for the grieving city of Las Vegas on Saturday, as federal and local officials hunted for any clue as to what drove the gunman in last weekend's massacre to start shooting.

Pence and his wife participated in a citywide "unity prayer walk" in honor of the shooting victims.

"We are with you today. Today we are all Vegas strong," Pence told participants gathered at City Hall. "President Trump personally asked us to be here to stand with you, to pray with you, for strength, comfort and healing."

"We find hope in the heroic actions in the Las Vegas Metropolitan Police Department, the fire department and all the first responders on that night who, without regard for their personal safety, rushed into harm's way," Pence said.

The vice president called the shooting "a tragedy of unimaginable proportions" and said, "Las Vegas came face to face with pure evil" that night.

Pence's visit comes as authorities appear no closer to discovering what motivated gunman Stephen Paddock to open fire from his 32nd floor hotel room onto crowds at the Route 91 Harvest Festival last weekend. Paddock took his own life, authorities have said, after killing 58 people and wounding nearly 500.

The family of one of the concertgoers killed last weekend is asking a Nevada court to appoint a special administrator to take control of the shooter's assets.

John Phippen, 56, of Santa Clarita, California, was at the festival with his son Travis when the shooting started. When the son, a medic, stopped to help someone, Phippen stayed with him and was shielding a woman when he was shot dead, said a neighbor, Leah Nagiyvanyi.

Attorneys for Phippen's family filed the petition Friday in District Court in Clark County. The petition asks a judge to appoint the county's public administrator to account for and control Paddock's estate -- in part to make it available for any future lawsuits filed by the shooting victims.

Investigators still are trying to piece together why Paddock went on the shooting spree. They have no credible information about his motive despite more than 1,000 leads and tips, Undersheriff Kevin C. McMahill said at a news conference Friday.

In the news briefing and an interview with CNN's Wolf Blitzer, McMahill released more details about the shooting and investigation Friday, including:

• A Mandalay Bay Resort and Casino security guard who authorities believe drew Paddock's attention toward the hallway outside his hotel suite went to that floor to respond to an alarm due to an open door near Paddock's room. The guard, Jesus Campos, was shot in the leg while checking on the alarm. According to a police-reported timeline, Paddock never fired on the crowd below again after that.

• The alarm from a room "a number of doors down" from Paddock's likely was a coincidence. The door was not forced open, had been open for a while, and Paddock didn't have the keys to that room. McMahill said that door either had been left open or didn't shut completely.

• Investigators looking into Sunday's massacre have found no known nexus to terror or connections to ISIS.

• Authorities are confident another shooter wasn't in Paddock's room but are still trying to determine whether anyone else knew of his plans.

• Authorities do not believe another person used Paddock's room key at the Mandalay Bay hotel.

• Investigators have reviewed "voluminous amounts of video" from different locations, including Mandalay Bay, and have not seen any other person they think at this point is another suspect.

• Asked about video on which Paddock might have discussed motive, McMahill said: "I am not aware that we have recovered any such video."

• Police don't know what the killer was going to do with 50 pounds of explosives found in his car.

• Paddock brought the 23 guns and ammunition he had in his hotel suite over the course of several days, the undersheriff told CNN.

• Paddock's girlfriend, Marilou Danley, continues to cooperate with investigators, her lawyer and McMahill each said Friday. Attorney Matthew Lombard said Danley wouldn't be making any more public statements in the near future.

Paddock tried to buy tracer ammunition at a gun show in the Phoenix area in recent weeks, a law enforcement official briefed on the investigation told CNN.

Paddock did not use tracer bullets when he fired into the crowd at the Route 91 Harvest Festival from his 32nd-floor suite at the Mandalay Bay hotel hundreds of yards away.

A source close to the investigation told CNN on Friday that authorities think Paddock might have fired at massive jet fuel tanks at McCarran International Airport near his hotel before shooting at the concert crowd.

At least 88 of the injured were still in Las Vegas-area hospitals Friday morning, with 37 of them in critical condition, representatives of the facilities said.

Six days after the mass shooting, authorities are trying to determine the motivation of the retired accountant, who had no criminal record and did not raise any flags while purchasing an arsenal of weapons.

In addition to the weapons in his hotel suite, Paddock had more than 50 pounds of exploding targets and 1,600 rounds of ammunition in his car in the hotel parking lot, police said, fueling suspicion he intended to survive the massacre.

McMahill said Friday there was no evidence that Paddock intended to use the target material for a homemade bomb.

"There's one of three ways it's going to end for an active shooter, and they pretty much all know this. You're either going to commit suicide; you're going to ... shoot it out with (police) and you're going to be killed, or you're going to continue on a preplanned rampage at locations B, C, D and E until the police finally stop you," Sheahan said.

A note with numbers written on it was found in Paddock's room, a source close to the investigation told CNN on Friday. The New York Times reported that authorities are trying to analyze the meaning, but Sheriff Joseph Lombardo of the Las Vegas Metropolitan Police Department didn't elaborate on whether they are significant or not.

"Lombardo said that it contained numbers that were being analyzed for their relevance, and that it was not a manifesto or suicide note," the Times reported.