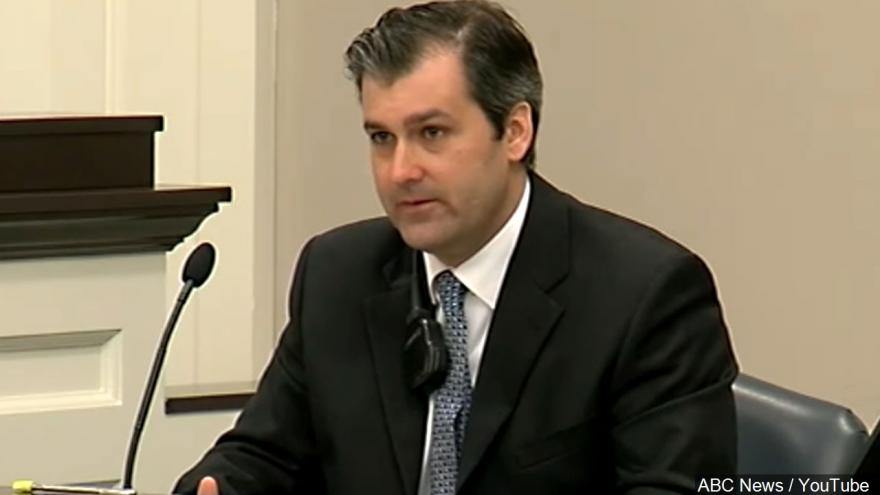 (CNN) -- With prosecutors calling for his client to spend the rest of his life in prison, Michael Slager's attorney painted him Monday as a dedicated and professional former law enforcement officer who'd never exhibited a tinge of racism.

Slager, the white former North Charleston, South Carolina, police officer who pleaded guilty to a charge related to his 2015 shooting of Walter Scott, wore a gray-and-white prison jumpsuit. His wrists and ankles were shackled to his waist.

He looked on stoically as his attorney countered the prosecution's claims that he maliciously killed Scott, a 50-year-old unarmed black man.

"Every stop he made had not the slightest implication of any racial implications," attorney Andy Savage said. "Nothing in his background from birth to today shows signs of any racial bias."

Savage presented a letter from an African-American woman thanking Slager, along with video from a traffic stop prior to Scott's stop, that the lawyer said demonstrated Slager's professional tone.

He also noted that most of the DNA found on Slager's Taser belonged to Scott, which he said supported his client's claim that he and Scott tussled over the Taser before the shooting.

Feidin Santana, the man whose cell phone recording of Scott's killing made the case international news, had a different take, saying he was in shock by what he saw that day.

"It was abuse and something that wasn't necessary," he said, describing Slager's actions.

Savage attacked Santana's credibility, asking him whether the government had paid him to testify (Santana replied that he hadn't been paid to testify), whether he'd made money from the cell phone video (Santana said he accepted money from an Australian media outlet) and even questioning his hearing and his history of paying taxes.

Visibly perturbed, Santana said at one point, "If you find I'm lying, I'm up to any charging. I'm here as neutral."

Scott's family has previously found strength in prayer, they said, as Slager's case has navigated the state and federal court systems. They planned on doing just that Monday, as prosecutors and the defense argued over what will constitute a just sentence for Slager's crime.

"We're praying that he will get a just sentence," Scott's brother, Anthony, 55, told CNN. "If he gets zero time, God has it under control."

A probation officer has recommended in a report that US District Judge David Norton sentence Slager to between 10 and 13 years in prison.

But federal prosecutors are seeking a life sentence. They say Slager committed second-degree murder and should also be punished for obstructing justice after the April 4, 2015, shooting.

Slager repeatedly lied to authorities and in court, including not initially telling authorities he shot Slager in the back while he was running away, prosecutors allege. Slager also tampered with the crime scene by moving his Taser, prosecutors said, planting it on the ground next to Scott's body.

"A Swiss cheese memory is a symptom of stress, not an indication of lying," his attorneys wrote in court papers, citing expert testimony.

In May, Slager pleaded guilty to deprivation of rights under color of law after a murder trial ended in a mistrial. He admitted he didn't shoot Scott in self-defense and said he used excessive force.

A foot chase followed. Slager's first attempt to use the Taser on Scott did not stop him. A second deployment brought Scott to the ground, but he got up and took off again. Slager opened fire as Scott ran away for the final time.

The video led to Slager's firing and arrest on a murder charge. Scott's death renewed "Black Lives Matter" protests after the father of four became the latest in the series of controversial killings of black men by police.

Santana previously said he saw Slager chase Scott. He followed the two men into a lot where he saw part of the incident before he began recording. Only the end of the altercation was caught on camera.

Santana described a struggle in which the officer was always on top, and Scott was trying to get away. He said they got up quickly.

"He (shot) the man running," Santana said during previous testimony.

In court Monday, Santana said he never considered handing over his video to police. He wanted to get the video to Scott's family, prevent it from falling into the wrong hands and protect his own safety, he said.

Slager: 'I knew I was in trouble'

On the stand during his murder trial, an emotional Slager testified his mind was like "spaghetti" during the altercation with Scott that day.

He argued that even at 18 feet away, Scott posed a threat and could have turned around and charged him. Prosecutors contended there was little physical evidence of a struggle.

"Scott would never stop after I gave him multiple commands to stop," Slager said in November.

Slager testified Scott was much stronger, and though he couldn't recall all the details, he remembered Scott wrestling away his Taser and briefly pointing it at him.

"I knew I was in trouble," Slager said. "I was in total fear Mr. Scott didn't stop, continued to come towards me."

Slager's murder trial ended in a mistrial after the jury failed to reach a verdict last December. Solicitor Scarlett Wilson issued a statement in May, after Slager's plea deal in federal court, saying it was unnecessary for her office to prosecute Slager again.

"Now that Slager has pleaded guilty to a willful violation, admitted the facts we set out to prove and waived the right to appeal his conviction, a successive prosecution by the state is not necessary," she wrote.

Anthony Scott said he plans to address the court Monday, along with other family members.

Scott said he shared stories about his relationship with his younger brother in his victim impact statement that was given to the judge. He said the younger Scott was "my first best friend" and a Dallas Cowboys fan who could easily recount childhood memories.

"He could go back and tell you what happened on such and such date," the elder Scott said.

Anthony Scott said his family will "not be satisfied with anything less than 20 years." But they are prepared for whatever the sentence will be.

"God has the final say-so," he said. "We're not going to leave with our heads down no matter what happens."