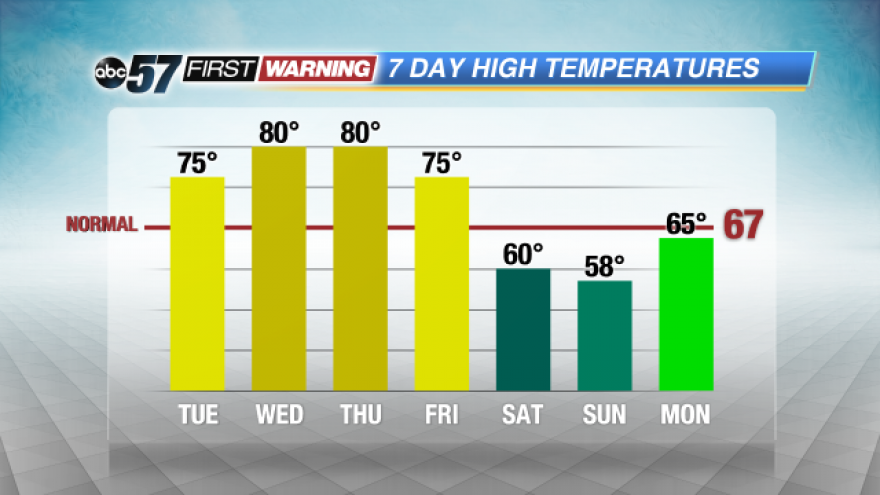 After near normal temperatures to start the month, highs are back on the rise for the first full week of October. After a warm September, marking four months in a row with above normal temperatures in South Bend, there's no sign of any major cool-down for the month ahead.

The October 4th is the average last date for highs at or above 80, we could see at least two days in the 80s this week and four days of temperatures well above normal. Recapping September we ended the month with 21 days of at or above normal high temperatures. The average temp for the month was 4.0° above normal, tying with 1919 for 15th on the list of warmest Septembers on record. Precipitation was near normal but there were long stretches of dry weather. October's outlook calls for more of the same. Above normal temperatures and near to drier than normal conditions. While October looks to be overall milder than normal, take that with a grain of salt. There will still be some ups and downs. Normal highs drop from the upper 60s to the mid 50s by the end of the month and we've never had an 80 degree day later than November 1st. Globally 2016 is still blowing away previous warm years, including the past two (2014,2015) that were the warmest on record. This is in part due to very warm El Nino during the past year. However that's only part of the factor, overall land and oceans temps continue to rise. This is the 16th month that we've seen above normal temperatures globally. Locally 10 of the past 12 months have seen above normal temperatures including last December which was the warmest December on record.