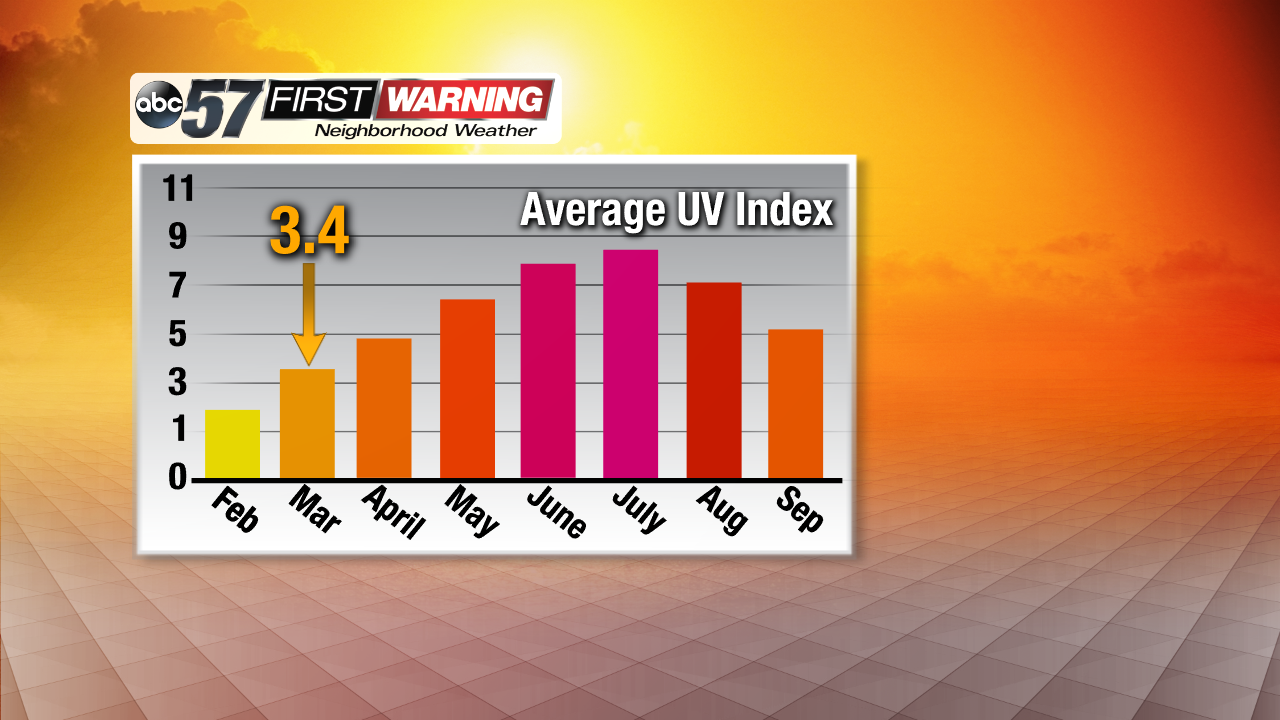 Monthly Average UV Index for South Bend
It may technically be winter until Tuesday, March 20th, but the days are getting longer and the sun angle is getting higher and higher. That means, despite the cold temperatures and cloudy days, sunburn is continuing to become increasingly likely. The way meteorologists discuss sunburn is via the UV Index, which is essentially the amount of skin-damaging UV radiation forecast to reach the earth's surface. The higher the UV Index, the higher the chance you have of damaging your skin. And, March is the time of year when sunburn starts to become a concern. South Bend has an average UV Index of roughly 3.4 over the course of March's 31 days, which is in the "Moderate" category. It's a significant jump from the average UV Index of 1.9 seen in February. 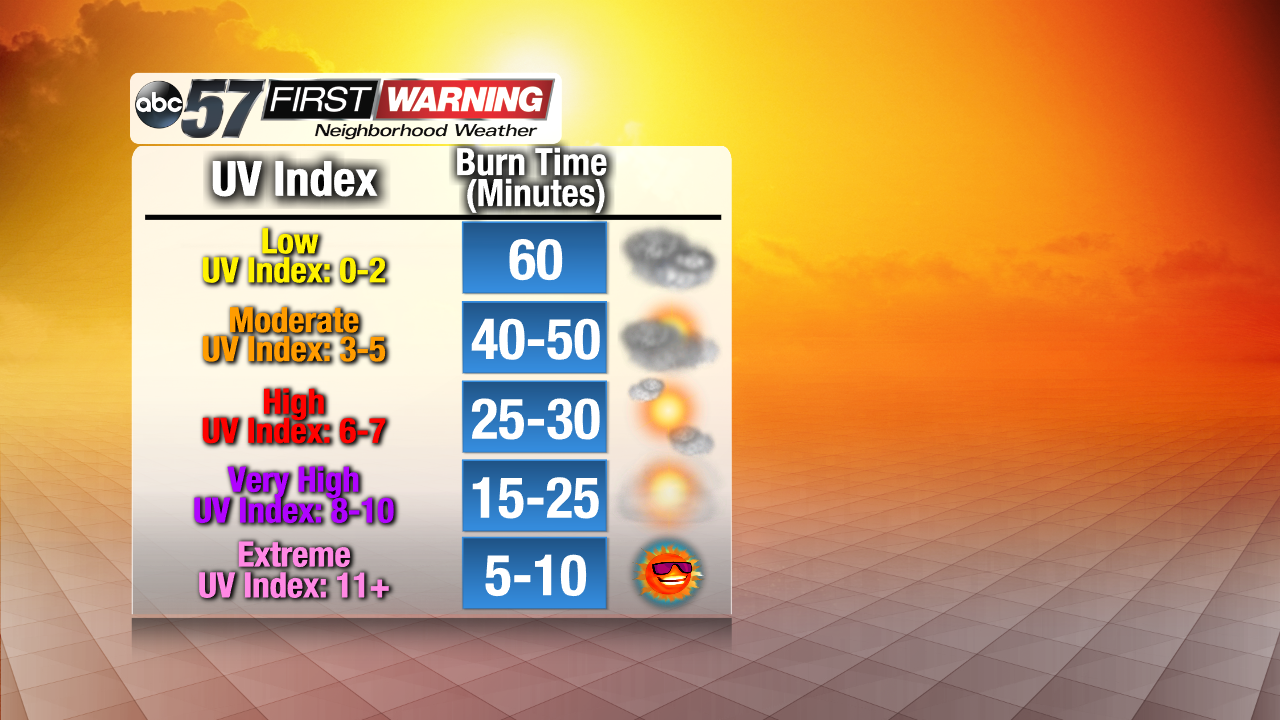 The UV Index scale.
What about cloud cover? Winter is the season in which Michiana sees the most cloud cover. That, in tandem with winter's low sun angle, is why the winter months see the lowest UV Index values. Clouds obviously still exist in March and April, but the sun angle gets much higher and the days get much longer. That is why the UV Index begins its big climb in March to values over 3. Once you exceed a UV Index of 3, sunburn can happen on unprotected skin, eyes and lips in a matter of about 50 minutes or so. By the time we reach April, sunburn can happen in as little as 40 minutes or so. As a result, it is important to begin applying sunscreen and other protective agents if you plan on venturing outdoors for a long duration of time. The rate at which sunburn occurs is even faster if you are near a body of water as the sun's dangerous rays reflect back from the water.

By the time we get to June, July and August, the sunniest of days can feature UV Indexes of eight to ten. Once you reach that category, dangerous sunburn and skin damage can occur in as little as 15-25 minutes! 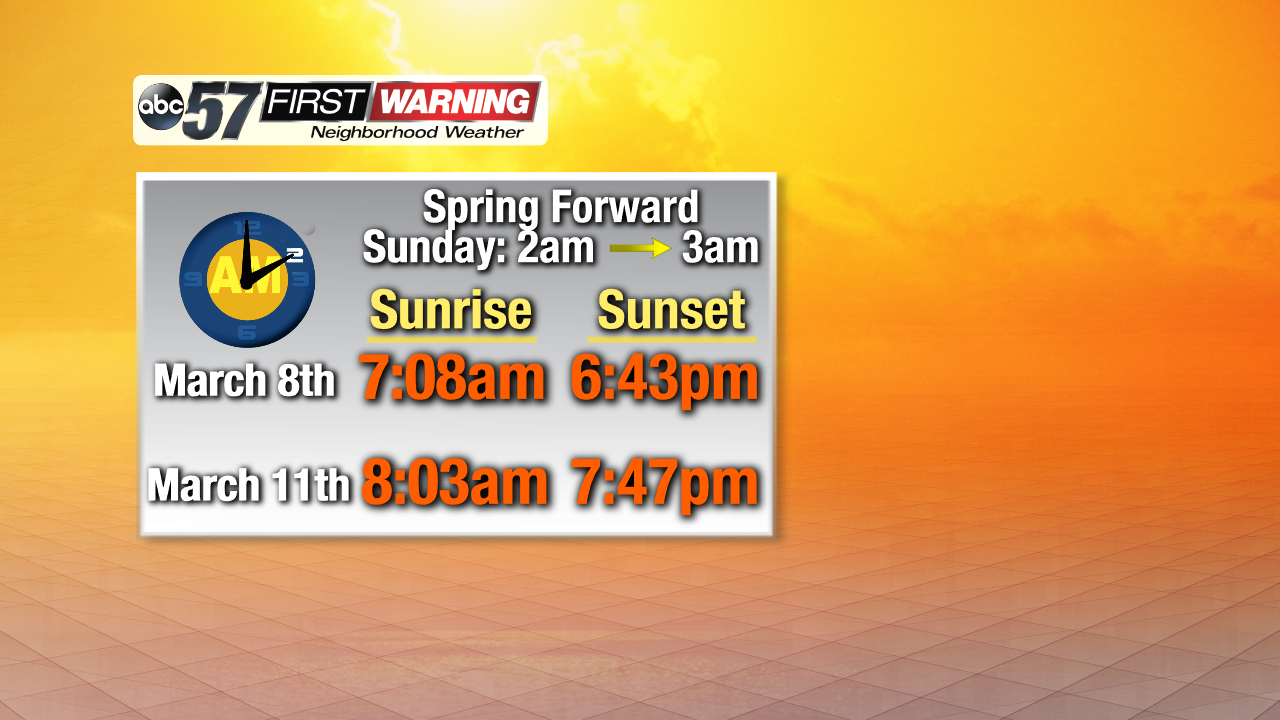 As mentioned above, the UV Index climbs during the spring and summer months courtesy of a higher sun angle and longer days. Well, those longer days are helped by springing forward. This year, we Spring Forward at 2 AM on March 11th. By pushing the clocks forward one hour, we experience a longer period of intense sunlight reaching earth's surface during the late morning and afternoon hours each day.

There's also the perk of later sunsets, of course. This Sunday, the sun will rise at 8:03 AM, but it won't set until 7:47 PM. That sunset time will continue getting later and later as we progress through March, April, May, and even the first half of June!