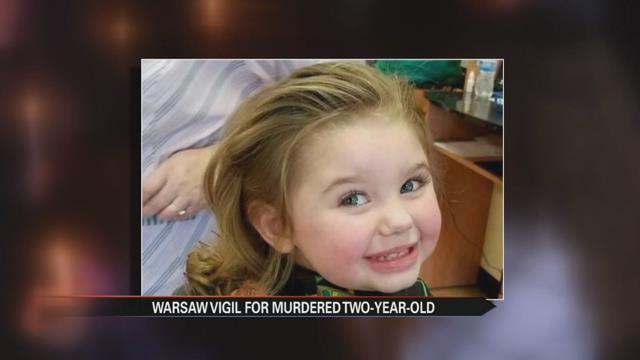 “Tonight we are gathering here to bring awareness of child abuse in our community which has been made most prevalent by the recent murder of Adalin Stamper, a two-year-old that was beaten to death by a former boyfriend of her mother,” said Josie Ryan,  a close friend of the family.

Two-year-old Adalin Stamper was found dead in the backyard of a house on Sue Avenue in Warsaw on November 11.

“This is an absolute senseless tragedy. There is absolutely nothing that that child could have done to deserve what happened to her, and there’s no excuse and no rhyme and no reason, and only one person to blame for this tragedy,” said Ryan.

The Kosciusko County Sheriff’s Department has arrested and charged Christopher Grimmett with the girl’s murder.

Instead, the community is standing up, lighting candles, and praying for the Stamper family.

Because the cheerful little girl they call their Addy Bear was a light in everyone’s life who knew her.

“She was just a wonderful, vibrant happy chubby cheeks little two-year old that just warmed your heart and brought a smile to anyone’s face,” said Ryan.

If you want to donate to help out with the family’s expenses, click on this gofundme page link here.

The American Legion Post 49 in Warsaw is also hosting a silent auction on December 3rd, with all proceeds benefiting the Stampers.