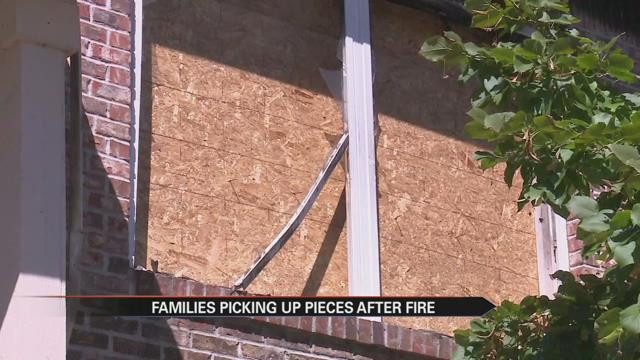 Eight Warsaw families were displaced Sunday evening, after a fire destroyed their apartments in the Canterbury Homes Apartment Complex.

It started out as a typical Sunday night for Anthony Lozano.

He looked outside, and saw the balcony above him was on fire already.  Lozano only had time to grab his kids and grandmother out of his home.

The Lozanos are just one of the families affected by the fire. But they're happy that the American Red Cross was on hand to lend some assistance.

The Red Cross provided money for hotels, food, and clothing to help them through the fire.

Lozano returned to his home Monday afternoon, trying to see what he could salvage.

He's appreciative that the fire department did what they could to save his belongings.  But he will be living in a hotel, paid for by insurance, until he can figure out what to do next.

But despite it all, Lozano is thankful.

"I'm grateful," he says. "Very grateful. A lot of people have reached out."

Crews are working to figure out what started the fire, but at this point they believe it was accidental.

Only half of the families were able to return to their homes Monday afternoon. The complex is trying to fix up those apartments soon, so residents can move back in.