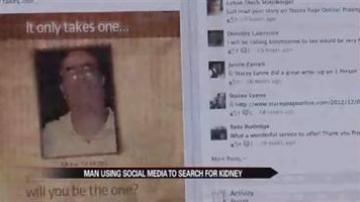 WARSAW, Ind. – A local man in need of a kidney transplant is getting attention – and offers of a kidney - on Facebook thanks to a Warsaw company. The company says its employees got involved simply because they know the man and they want to help.

Mike Stetzel is the General Manager of the Wyndham Garden Hotel on East Center Street in Warsaw.

"In July 2010 I was added to the donor list and in September 2010 I started home dialysis,” said Mike Stetzel.

"Until now he hasn't had a lot of issues,” said Mike’s wife Chris.

After years waiting on the donor list without finding a match and two recent trips to the hospital, Chris says she and her husband along with their four children are overjoyed a Warsaw web design and promotions company has stepped in free of charge, hoping to help find a kidney match.

“We first started "1 Person 1 Kidney" on social media with a Facebook page. Facebook and Twitter were the first two primary things and now we are in the process of building a website for people who are in need of kidneys,” said Justin Farrell, PayProTec Chief Operating Officer.

The Facebook page launched November 9th and as of Monday the page already has more than 300 likes and even a few offers where facebook users say they are willing to donate a kidney.

"I would love for it to be successful,” said Chris.

The couple says there are a lot of tests those willing donors have to pass before it’s a done deal.

Right now they are thankful for the spotlight Payment Processing Technologies, LLC. also knows as PayProTec, has put on the need for kidney donation, not only to help them now but others in the future.

"That this becomes an actual 501c3 organization and becomes something that really has legs and continues for years to come and helps lots and lots of people,” said Mike.

"At first we were thinking how do we save Mike's life, but as we started thinking about it more this is something that could save a lot of people's lives,” said Farrell.

Farrell said Mike and Chris' daughter Courtney works for PayProMedia however, during the school year she is a student at Ball State University. PayProMedia and PayProTec are both owned by Matt Hoskins.

The Stetzels said they know Hoskins, Farrell and serveral other employees at Hoskin's company through their local church.

Mike said, "Testing is paid for by Indiana University Medical Center and the actual transplant surgery is covered by my insurance. All donor expenses, for the donor family would be covered by fundraising my Mom is willing to do."