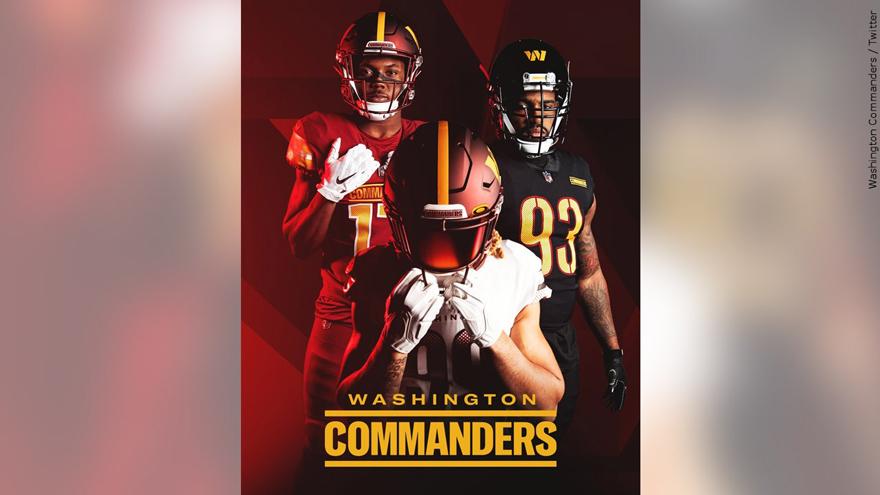 Accompanied by a new logo, the changes come about 18 months after the franchise ditched the "Redskins" name for its racist connotations.

The team had competed as the Washington Football Team for the past two seasons but will continue to use its burgundy and gold color scheme.

Former Washington quarterback Joe Theismann looked to have prematurely leaked the new name on Monday after calling the team "the Commanders" on CBS Sports Radio's "The D.A. Show."

Theismann's reveal was then seemingly confirmed on Tuesday after helicopter footage above Washington's FedEx Field Stadium appeared to show the new name emblazoned on a sign inside the team store.

Last month, team president Jason Wright had ruled out the new name changing to "Wolves" or "RedWolves" due to trademark issues.

"We are very excited about our final selection, which aligns with our values, carries forth our rich history, represents the region and, most importantly, is inspired and informed by you, our fans," Wright said.

The change stems from Washington's July 2020 decision to drop its "Redskins" name and logo after decades of criticism from Native American groups who said it was an ethnic slur and a derogatory reference to skin color.

Once one of the NFL's flagship franchises, Washington has won just two playoff games since Dan Snyder bought the team in 1999 and has been a consistent source of dysfunction and scandal in recent years.

The rise and fall of 'Redskins'

The team was founded in 1932 as the Boston Braves, but team founder George Preston Marshall changed the name to "Redskins" a year later to avoid confusion with baseball's Boston Braves. The team moved to Washington DC in 1937.

The name's reference to skin color, as well as its logo depicting a Native American with feathers in his hair, has been criticized at least as far back as 1971-72. Still, the team steadfastly resisted efforts to change its name, and Washington owner Dan Snyder told USA Today in 2013 that he would "never" do so.

However, the franchise faced renewed pressure to finally do so in 2020 after the police killing of George Floyd sparked mass protests seeking to end systemic racism. FedEx, which has naming rights for Washington's NFL stadium, asked the team to change the name in response to growing pressure from investors. Companies including Nike, Amazon, Target and Walmart said they would stop selling the team's merchandise.

Under this business pressure, Washington announced a review of its team name in July 2020 and a week later said it would drop the "Redskins" moniker altogether. Since then, the franchise has gone by the generic "Washington Football Team" with a large "W" as its logo.

Other sports teams with Native American names have faced similar pressure. The MLB's Cleveland Indians changed its name to the Guardians, while MLB's Atlanta Braves and NHL's Chicago Blackhawks have resisted such a switch.

Aside from the team name, the Washington franchise has had other major issues with how it is run.

The NFL fined the Washington Football Team $10 million last year following the conclusion of an independent investigation that found the club's work environment was "highly unprofessional," especially for women, according to a news release from the league.

The fine came after 15 former female employees and two journalists who covered the team accused team staffers of sexual harassment and verbal abuse.

"Bullying and intimidation frequently took place and many described the culture as one of fear, and numerous female employees reported having experienced sexual harassment and a general lack of respect in the workplace," NFL Commissioner Roger Goodell said in the release.

Snyder also apologized and took responsibility for the workplace culture in a statement, but he remained in charge of the team.

The NFL has refused to make the investigative report public. However, as part of the investigation, the NFL obtained emails between coach Jon Gruden and former Washington president Bruce Allen in which the coach made racist, homophobic and misogynistic remarks.

The emails were leaked to the media in October 2021, forcing Gruden to resign as head coach of the Las Vegas Raiders.

Correction: A previous version of this story misstated the home city of the Raiders. The team plays in Las Vegas.