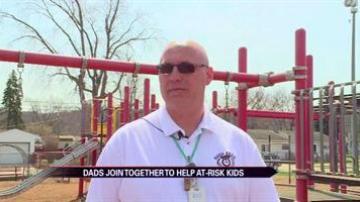 MISHAWAKA, Ind. -- Recent studies show that kids without involved dads are more likely to have behavioral issues in school and are at a higher risk of dropping out. A group of local fathers are becoming Watch D.O.G.S. at LaSalle Elementary School to help at-risk students.

As Watch Dads Of Great Students, or Watch D.O.G.S. are male volunteers who go to LaSalle Elementary to deter bullying and make students feel safer.

Growing up without a father figure isn't easy for any child-and it's something Watch D.O.G.S. Coordinator Michael Peck can understand.

"My dad left when I was two years old and luckily a couple years later I had another father step in, but without a male role model, a lot of stuff is missed, a lot of life lessons," said Peck.

Peck is looking to change that reality for students at LaSalle Elementary.

"You can see a lot of these kids don't have fathers at home or their fathers have left them," said Peck.

Watch D.O.G.S. recruits local dads to go to school with their children to be a role model to other students who don't have a father at home.

"We're not in there as police officers or anything, we're just in there as a male role model, which most kids are missing nowadays," said Peck.

With cyber bullying and violence on the rise in schools across the country, Peck says Watch DOGS provides students with someone they can trust.

"At least when they come to school there will be someone there that they can talk to and count on, that will keep their word," said Peck.

With three dads on the team and more in the process of joining, Peck says he hopes this new program continues to grow.

"If we get more fathers to come out here to jump in and join in and just spend a day out here with them that would impact the kids greatly," said Peck.