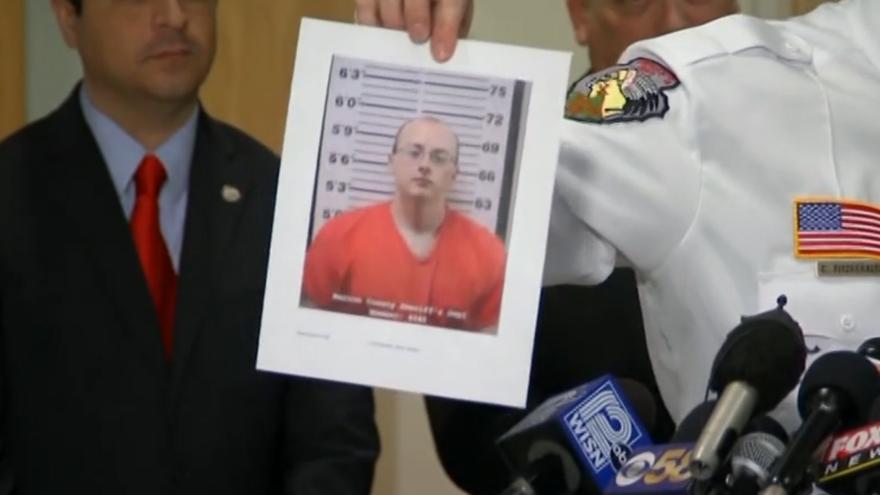 BARRON, Wis. (AP) — The Latest on a Wisconsin teenager who was found alive three months after disappearing following her parents' deaths (all times local):

Ownership of a remote cabin where a Wisconsin teenager was apparently held during a nearly 3-month disappearance passed to a credit union soon after the girl's abduction.

Records show that defendant Jake Thomas Patterson's father transferred the title of the cabin near Gordon to Superior Choice Credit Union on Oct. 23, eight days after the Oct. 15 attack at the Closs family's home near Barron, which is about 60 miles (100 kilometers) south of Gordon. It was appraised at $79,300.

Jake Patterson was arrested Thursday after authorities say 13-year-old Jayme Closs managed to escape from the cabin and approach a neighbor, who sought help. Authorities believe he killed Jayme's parents to abduct her. He is jailed on homicide and kidnapping charges. Jail records don't list an attorney for him.

The company that employed the slain parents of a Wisconsin teen who was kidnapped says the man accused in the attack worked at the plant for one day nearly three years ago.

Steve Lykken, president of the Jennie-O Turkey Store in Barren, issued a statement Friday saying 21-year-old Jake Patterson was hired one day but quit the next, explaining that he was moving away from the area.

An obituary for James and Denise Closs says they worked at the turkey processing plant for 27 years.

Lykken says the company and the Hormel Foods family are "overjoyed at the news of Jayme's safe return."

Authorities say Jayme escaped from a cabin in the town of Gordon on Thursday and they arrested Patterson on homicide and kidnapping charges.

Detectives are interviewing a 13-year-old Wisconsin girl who authorities say managed to escape from a cabin months after being abducted from her home.

Barron County Sheriff Chris Fitzgerald said Friday at a news conference that investigators don't think Jayme Closs had ever interacted with 21-year-old Jake Thomas Patterson before they say he killed her parents and kidnapped her in October. He said he doesn't know if Jayme was abused by her captor and that detectives are interviewing her about her ordeal.

Authorities say Jayme escaped Thursday from a cabin near Gordon and they arrested Patterson on homicide and kidnapping charges.

Gordon is in Douglas County and about 60 miles (100 kilometers) north of the Closs' home in Barron County. Fitzgerald said Patterson has a tie to Barron County, but he didn't specify except to say it wasn't a connection to the Jennie-O Turkey Store in Barron where James and Denise Closs worked.

A woman who called 911 to report that a missing 13-year-old Wisconsin girl had been found says the girl told her that the man arrested in the case "killed my parents and took me."

Kristin Kasinskas told The Associated Press on Friday that Jayme Closs said she didn't know why she was targeted.

A 21-year-old Gordon man, Jake Thomas Patterson, was arrested Thursday on homicide and kidnapping charges. Authorities say Jayme managed to escape from a cabin in Gordon where Patterson was holding her and that she encountered a woman walking her dog, who knocked on Kasinskas' door.

Kasinskas says she doesn't really know Patterson even though he lives three doors down from her. She says she taught him middle school science but only remembers that he was quiet.

Kasinskas says she didn't see Patterson during the months that Jayme was missing.

Authorities say investigators are trying to learn more about what happened to a 13-year-old girl since her parents were killed and she was abducted during a home invasion in October.

Barron County Sheriff Chris Fitzgerald said at a news conference Friday that Jayme Closs managed to escape from a cabin in the town of Gordon on Thursday. She found a woman walking her dog and the woman notified a neighbor, who called 911.

A 21-year-old Gordon man, Jake Thomas Patterson, was arrested on charges of first-degree homicide and kidnapping. Fitzgerald says investigators believe he killed Jayme's parents because he wanted to kidnap her.

Fitzgerald says detectives are speaking with Jayme and that she'll be reunited with her relatives when they're done. He says her relatives hugged and cried when told Thursday that Jayme was found alive.

A neighbor says she and her husband had problems years ago with the man suspected of kidnapping a Wisconsin teenager and killing her parents.

Authorities announced Friday that they arrested 21-year-old Jake Thomas Patterson on Thursday on suspicion of kidnapping 13-year-old Jayme Closs and killing her parents at their home near Barron in October. Investigators say Jayme escaped from a cabin in the town of Gordon where Patterson was holding her Thursday.

Patterson has no criminal history in Wisconsin. Daphne Ronning told the Milwaukee Journal Sentinel that Patterson's parents moved to Gordon about 15 years ago.

She says the parents later moved away but Patterson and his brother continued to use the home. She says she and her husband once caught them siphoning gas. She says her husband spoke with them and they didn't have any further problems.

Ronning says she didn't know Patterson was living in the house and hadn't seen Jayme around.

Wisconsin authorities say they believe 13-year-old Jayme Closs was "the only target" of a man suspected of kidnapping her and killing her parents in October.

He says Patterson "planned his actions and took many steps to hide his identity" and that Patterson had no prior criminal record.

Fitzgerald says Jayme managed to escape from a cabin on Thursday and approached a woman who was walking her dog. That woman alerted a nearby neighbor, who called 911.

Fitzgerald says Closs was medically cleared, is out of the hospital and is being interviewed by law enforcement.

Authorities say they have jailed a 21-year-old man on kidnapping and homicide charges in the October killing of a Wisconsin couple and abduction of their teen daughter, who was found alive.

Barron County Sheriff Chris Fitzgerald says investigators believe Patterson killed Jayme's parents because he wanted to abduct her, and that Patterson "took many steps to hide his identity."

On Thursday, Closs walked away from a cabin where she had been held. Dalbec says Patterson was arrested based on a description of his vehicle that Jayme was able to provide.

Jayme approached a woman out walking her dog in a neighborhood, who notified a neighbor who called 911.

The woman who was the first to encounter a missing Wisconsin girl who vanished after her parents were killed says the teen called out to her for help, said she was lost and grabbed onto her before telling her who she was .

Jeanne Nutter tells The Associated Press her many years as a social worker in child protection helped her keep Jayme Closs calm as they sought help.

Closs is the 13-year-old girl who vanished Oct. 15 after her parents were fatally shot at their home about 60 miles to the south in Douglas County.

Nutter says Jayme had walked away from a cabin not far from her place where she had been held. Nutter says her goal was to get Jayme to a safe place where the police could be called, so they went to a neighbor's house.

Elizabeth Smart says it is a "miracle" that a 13-year-old Wisconsin girl missing for nearly three months has been found safe .

Smart was 14 when she was abducted from her Salt Lake City home in 2002. She was rescued nine months later.

Jayme Closs disappeared in October after her parents were killed inside their home in Barron, Wisconsin. She was found Thursday in a town about an hour's drive away after approaching a woman walking her dog, saying she'd been held against her will.

Smart posted Friday on her Instagram account that she was thrilled Jayme had been found. Smart says that while the country celebrates this "happy occasion," the girl's family should be given "space and privacy on their road to finding a new sense of normal and moving forward."

Smart says "whatever other details may surface, the most important will still remain that she is alive."

A woman who helped a Wisconsin girl who'd been missing for three months following her parents' deaths says the girl told her she'd been held against her will.

Kristin Kasinskas says she took 13-year-old Jayme Closs into her home after the girl and a woman she'd approached for help came to her door Thursday afternoon in the small town of Gordon.

Kasinskas tells NBC's "Today Show" that Jayme talked about being locked up or hidden when the person had to leave, but that the girl didn't detail how she got away.

Jayme was reported missing on Oct. 15, after her parents were found fatally shot in their home near Barron, about an hour's drive south of Gordon.

The grandfather of a Wisconsin girl who went missing after her parents were killed in October says he received a call late Thursday that he'd been praying for, informing him his granddaughter had been found alive .

Robert Naiberg told The Associated Press on Friday that his daughter called him with news that 13-year-old Jayme Closs had escaped her captor near the small town of Gordon, about an hour's drive from where her family lived.

Naiberg says Jayme reported that she'd been held by "a guy in the woods" but was able to escape.

Witnesses say Jayme approached a woman walking her dog Thursday, asking for help. The woman took her to a nearby home owned by Peter Kasinskas.

Kasinskas tells Minnesota Public Radio News that Jayme told him she'd been abducted, that her parents had been murdered and that she left a nearby house after she'd been left alone.

Investigators confirm a suspect is in custody but say no other details would be released until a Friday news conference.

The aunt of Wisconsin teenager who disappeared after her parents were killed in the family's home says the girl escaped from where she was being held and ran to a woman walking her dog for help.

Jen Smith tells ABC's "Good Morning America" that investigators told her that her niece, 13-year-old Jayme Closs, had escaped and was being treated at a hospital Thursday.

Smith says she was given no other details about the case, other than being told a suspect was in custody.

Investigators confirm they have a suspect in custody, but say no other details would be released until a Friday news conference.

Jayme had been missing since Oct. 15. Police discovered someone had broken into her family's home in Barron, killed her parents and apparently abducted her.

Jayme was found in the Town of Gordon, about an hour's drive north of Barron.

Investigators are expected to explain how they located a Wisconsin teenager missing for three months alive and took a suspect into custody.

Authorities say 13-year-old Jayme Closs was found Thursday afternoon in the Town of Gordon in Douglas County, Wisconsin. A suspect was apprehended minutes later. Jayme was taken to a hospital for an evaluation.

Jayme had been missing since Oct. 15, when police discovered someone had broken into her family's home in Barron, killed her parents and apparently abducted her. The Town of Gordon, where she was found, is about an hour's drive north of Barron.

The Minneapolis Star Tribune reports Jayme approached a woman walking her dog but authorities have released no details. The Barron County Sheriff's Department has scheduled a news conference Friday morning.