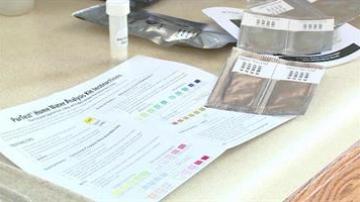 SOUTH BEND, Ind. -- There's growing concern about contaminated well water in Granger, but there's also a concern about the water in Gilmer Park on South Bend's south side.

The Health Department says the results to the county's study came back with alarming water contamination numbers in Gilmer Park.

"We got the water purifier. It's what we normally use. My grandpa drinks a lot of water and we normally will use that and we just never really gave it any thought to how pure the water is that is coming out," said Eric Shannon, resident of Gilmer Park.

On the Health Department's map, there's a high concentration of nitrates in the well water in Gilmer Park. It also shows a presence of human waste.

The Health Department says everyone needs to have their water tested.

"We've never had a smell coming from the water so we've just never gave any thought," said Shannon.

"We can see here that it's just getting a darker and darker pink so it's at least at 25 ppm," said Norwood.

The EPA says water that has more than 10 parts per million of nitrates is not safe to drink.

"It definitely makes you think about what you're drinking because we feed it to the pets and everything," said Shannon.

Our first test was the water straight from the faucet.

We tested the water from the purifier next.

That water wasn't as bad as the non-purified water, but there were still too many nitrates in the water for it to be healthy.

"That is terrible. After seeing this I think we might be stocking up on bottled water. I'm actually glad you guys stopped by and did that," said Shannon.

The Health Department says its best for you to have your water tested professionally but, we bought a kit for under $30 and it can be used to at least give you an idea of what's in your water.