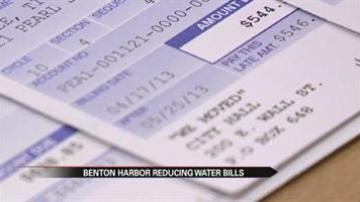 BENTON HARBOR, Mich. -- The city of Benton Harbor is lowering water costs by five percent. Thursday, residents gathered in city hall along with Commissioner  Marcus Muhammad, to talk about how outrageous their water bills are. Residents brought their bills to the meeting, all of them were at least a couple hundred dollars.

"Individuals have grocery bills, medical bills, things of that nature," said Mayor James Hightower, "To be able to give them a five percent decrease, I know its modest, but residents are happy about it, and I'm ecstatic about it."

With water bills in the hundreds, and some in the thousands, residents say a five percent decrease will not even make a dent in their bills.

But at Thursday's meeting, residents were far from happy. "I'm just trying to figure our what's going on with this bill, the bill is way more than my rent is.  I might as well be staying at the water department." expressed one resident, and mother of young children.

One man took the podium who owns an apartment complex in the city. He says in 15 years his water bill has never gone over $200, until recently.

The city finance director, Jody Lundquist, says the renovations to the water plant are a major expense and it is no secret Benton Harbor has some of the highest water rates in the area.

"The city its largest and broadest customer base, now we have to spread out the same cost over a smaller number of people," she explained.

In the meantime, people are cutting corners where they can, bathing their kids all at once, not watering their grass, and not washing their cars, but they say the bills are still sky high.

"It’s a no win situation, you get your bill paid down to zero and you still have to make some payment arrangements the next month because its right back up to several hundred dollars."