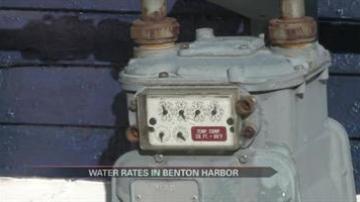 “I have kids to take care of and I can’t pay extra money out to the city of Benton Harbor for the water bills because of what they did in the past,” said Tiffany Nattee, Benton Harbor resident and mother of four.

“I'm still trying to figure out why my usage is so high!”

Nattee says the water department has never been out to read her meter; she would know if it had.

“My water meter is not outside, it’s in the house," Nattee explained.

Less than five minutes away, in St. Joseph, a family of six says they constantly use their water.

“We do two loads of laundry every day, dishes and laundry every single day,” said Scott Lutzen, St. Joe resident and father of four.

They are only charged $170 every three months, which breaks down to about $57 per month.

But the same size family in Benton Harbor is using less water and paying more.

“We have a washing machine, but I don’t wash like that, in fact, every Sunday is when I wash.” said Nattee.

She says the water bill is the one bill that she cannot afford to let go unpaid and she will do whatever she can to keep the water running, even if the numbers do not add up.

“I have to, I mean, even though I don’t agree with what they are doing, I still have to provide for my kids.”