NOW: Another list of demands for Buttigieg presented at Black Lives Matter rally

The rally was hosted by the local group BlackTavists at the Jon R. Hunt Plaza in front of the Morris Performing Arts Center. The group was joined by nearly 60 community members and members of the Black Lives Matter movement from around the state of Indiana.

At the rally, protesters shared their experiences with police brutality in the city and read a list of demands they think can inspire change in the wake of the fatal officer-involved shooting of Eric Logan. They carried flags and posters that said “Justice for 5-9 Eric Logan” and “Do The Right Thing Pete.”

The list of demands called for the city to compensate the family of Eric Logan, that Mayor Pete Buttigieg fire officer Ryan O’Neill, Aaron Knepper and Police Chief Scott Ruskowski, stronger use of body cameras, and the creation of a civilian review board.

The mayor has already addressed some of the issues presented at Saturday’s rally but for some in the crowd, it still isn’t enough.

Buttigieg ordered body cameras be turned on at all times in the days following the shooting. At a nationally-televised town hall he addressed that he does not have the authority fire the police chief or the officers involved in the shooting and that that authority lies with the Board of Public Safety. Monday at a press conference he addressed that he would not create a civilian review board but that he would create a citizen seat on the board of public safety and give the opportunity for community members to review body camera, pursuits, and use of force policies.

BlackTavist founder and the organizer of Saturday’s BLM rally Jordan Giger said it’s still important to keep the pressure on city officials to do the right thing because he thinks there is no place for racism at the South Bend Police Department.

“The reason why we’re having this event or this rally right now is because there was an internally leaked document where Sgt. O’neill which is the Sgt. accused in the death of Eric Logan referred to a black woman as ‘black meat,’” Giger said.

Tiana Batiste-Waddell spoke at the rally about another thing she thinks will kick start change at SBPD, a test called the Intercultural Development Inventory, or IDI. She revealed to the crowd Saturday that she met with Mayor Pete after suggesting the test be administered to SBPD officers at a town hall. She said she still has not seen further action from the mayor to administer the test but that she’s going to keep pressing the issue.

Eric Logan’s brother, Tyree Bonds, also took the microphone at the rally Saturday. He talked about issues that affect people of all races and genders like homelessness in South Bend and also took some of the responsibility for change off of city officials.

Following the rally at the Jon R. Hunt Plaza, the group marched to the County City Building chanting “fight back” and “no justice, no peace, no racist police.”

Rally organizer Jordan Giger addressed the crowd after marching and said that this is not the last of the events they have planned to demand justice in South Bend. BlackTavists have plans to host a conversation with Dr. Melina Abdullah of the Los Angeles Black Lives Matter chapter at Linden Grill Wednesday at 6:30 p.m.

On Aug. 3, he said they plan to host a 24-hour standoff in front of the County City Building to raise awareness for the demands they presented at Saturday’s rally.

“The message today was unity, really that the community is not going to stand for the senseless murder of Eric Logan and violence against women and other people of color in the community,” Giger said. 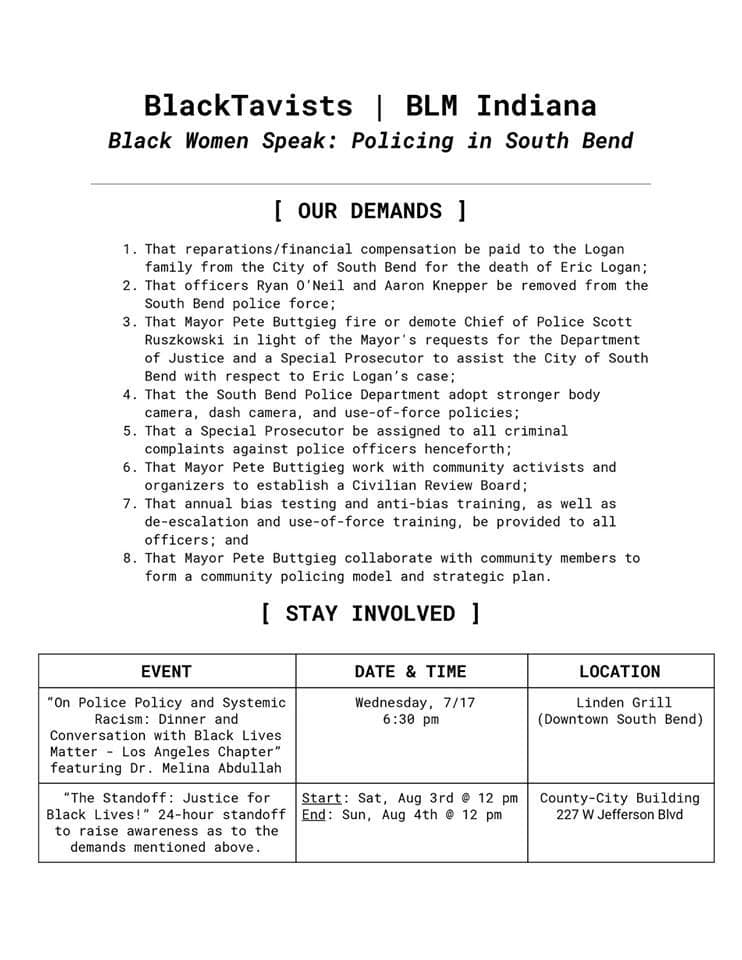 Flyer with list of demands for Mayor Pete Buttigieg passed out at the Black Lives Matter rally Saturday.