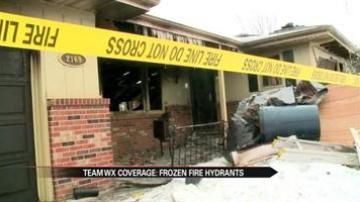 BENTON HARBOR, Mich. -- A family is homeless after a fire destroyed their home Sunday morning.  It happened on Linda Street in Benton Township. Crews say the weather played a large role in how long it took to fight the blaze.

Three fire hydrants were nearby, but crews were not able to use any of them.

"Some were frozen shut, others were buried underneath snow from the plows, so it was very difficult to bring the fire under control," says Lieutenant James Fogarty of the Benton Township Fire Department.

When a hydrant is frozen, crews generally don't waste time trying to thaw it out, they just find another one.

Crews finally had to call in the water department, an extra step in the process that emergency responders just don't have time for.

"Firefighters rely on the trucks, rely on the water they can get to easily, especially in town, and when you can't get any it really takes a few minutes to figure out another alternative," says Fogarty.

Nobody was seriously injured in the fire.