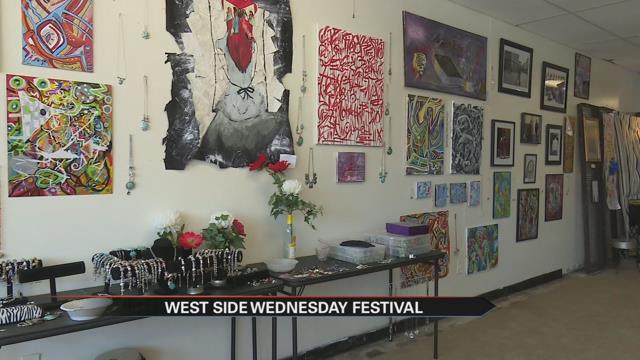 West Side Wednesdays have expanded from lunch meetings to a full-blown festival, and the first one is this Wednesday in South Bend.

They originally started last year as lunch meetings, but they soon attracted too many people. Event organizer Sam Centellas said he had to stop advertising the meetings, because they were filling up an entire restaurant.

…in what Sam calls the anchor of the community, Rosales Plaza, the local supermarket.

“One thing led to another, and next thing we know we’re doing a huge festival,” said event organizer Sam Centellas.

West Side South Bend used to be notorious for being riddled with crime, but now volunteers are hoping to turn that impression around.

“I grew up here, and just driving through, everything seems so dried all the time and it was like you know Mexicans or latinos are not that bad, but how can you show that off when there’s no…” unifying community event, said Julian Alcantar, local artist and volunteer.

At least, that was the case until West Side Wednesdays. And, they’ve grown dramatically in the past few months.

The festival mirrors the blossoming of this community. Back in October, South Bend re-paved the roads and sidewalks, and the community began to take pride in their neighborhood.

“Everywhere I travel, I talk to people, they’re like, oh Western Ave, what’s out there, and we’ve taken great pride in what’s happening out here and the development, and we want to show it off,” said Sam Centellas.

They also hope to bring people together from all over…just like in the art gallery some local artists put together for the event. It features more than 100 pieces from artists in Elkhart, Mishawaka, and South Bend, including volunteer Julian Alcantar. He wants the gallery to set a positive example for kids in the area.

“We believe it’s very important for children to be able to experience something like this at a young age, because then that opens up their mind to inspire their own creativity, so they can see there’s more to life than the everyday life,” said Julian.

Plus, this festival hopes to gradually break stigmas and re-establish the West Side as a cultural hub.

“It matters to me, because like I said I grew up here, and I want to have an impact on the betterment of this community and this area, and what better way to do that than take part in an event like this?” said Julian.

West Side Wednesday started at five o’clock and lasts until ten.