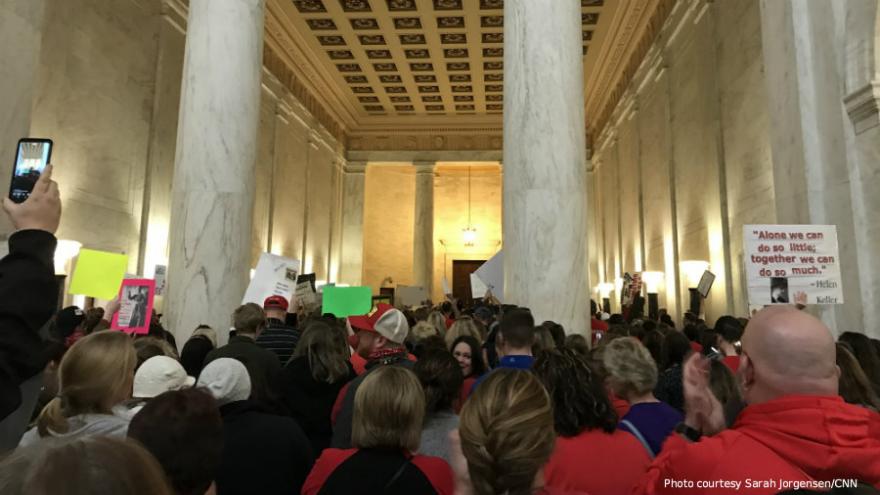 (CNN) -- West Virginia lawmakers failed Monday to agree on a proposed pay raise for thousands of teachers and school employees, pushing an ongoing strike into a ninth day.

A legislative conference committee had been appointed to resolve differences between bills in the House and Senate.

Republican State Sen. Ryan Ferns, a co-chair of that committee, told reporters late Monday he had proposed a compromise to some House leadership but Ferns did not reveal details. The six-member committee will meet again at 9 a.m. on Tuesday, as members expressed urgency to meet teacher demands and end the strike.

"We need to get this resolved as quickly as possible," said Rep. Brent Boggs, a Democratic committee member.

Schools systems in nearly all of the state's 55 counties have announced they will remain closed Tuesday.

Last week, Gov. Jim Justice and the union leaders agreed that teachers and service personnel would receive a 5% pay raise. The House approved the proposal, but the Senate passed a 4% raise. Union leaders say the teachers won't return to work until they get a 5% raise.

There is a $6.9 million difference between the two proposals, according to new projections from the governor's office and the House finance committee. Earlier, Democrats in the Legislature said new revenue projections show the money is there, and that a 5% raise would amount to $13 million more in spending than a 4% bump.

"We are only talking about a minuscule amount of money," state Sen. Robert Plymale, a Democratic committee member, said referring to the $6.9 million difference.

"I'm still concerned -- very concerned for that matter -- that the numbers are not accurate" he said.

State House Rep. Paul Espinosa, a Republican and committee co-chair, said House members are "convinced that the figure that's going to get our students back in the classroom is 5%."

"We can all debate and discuss how we got to this point, but I think that's where we are," he said.

Union representatives said they were unaware of Fern's proposed compromise.

Crowds cause capacity concerns at Capitol

Many teachers, service personnel and other citizens descended on the state Capitol to express their concerns about pay. The size and density of the crowds has prompted a "capacity concern from Capitol Police and the West Virginia Fire Marshal.

"No further visitors are being admitted at this time," the state Department of Military Affairs & Public Safety said. Capitol Police and organizers are working to "ensure manageable conditions this afternoon," the agency said.

West Virginia public school teachers are continuing their strike because the legislature didn't meet their demand for higher pay and better benefits over the weekend. About 20,000 teachers walked out February 22, keeping almost 277,000 students out of class.

West Virginia public school teachers earn an average salary of about $45,000, making them among the lowest paid educators in the United States. School service personnel are also walking out. The pay raise must be passed as a law, since West Virginia is not a collective bargaining state.

A GoFundMe page for the striking workers had garnered more than $250,000 by late Monday.

The WV Teachers Strike Support Fund, started by citizens and not sponsored by unions, is designed to help "teachers and school service personnel who are taking on great personal cost to organize and support their families during the strike."

The fund said it doesn't expect to collect enough money to supplement lost salary or wages, but aims to help meet needs.

"Thanks, everyone. Strike Support Fund Committee has met for a second time today. We have now reviewed 174 requests and approved more than $71,000 -- to teachers and school service personnel to cover strike costs, child care, medical bills, lost pay for aides and substitutes, re-stocking food pantries, and other efforts to support children and families during the strike. ..."

Other issues in West Virginia, Oklahoma

The House bill with the 5% raise quickly passed last Wednesday, but Senate lawmakers expressed concern about how the state will fund the raise and passed the 4% version on Saturday after hours of debate and discussion.

The House voted not to adopt the 4% version of the bill. With no agreement between the chambers, the conference committee was created. Three members from the House and three from the Senate -- two Republicans and one Democrat -- were selected.

The group has until Tuesday to come to a decision about the bill. The House and the Senate could extend that deadline. If a meeting of the minds eventually fails, an earlier law specifying a 2% raise for teachers' pay would kick in, and then 1% over two years.

On the House floor Monday, Delegate Justin Marcum, a Mingo Democrat, urged the House of Delegates to resolve the pay raise bill before any other bills are considered from the Senate, according to the West Virginia House Democrats Facebook page. The suggestion was rejected by the Republican leadership.

"However, all members of the House are in agreement that they will not back down from the 5% pay raise that passed the House, and the Delegates representing the House on the pay raise conference committee have been notified they are to stand their ground on 5%," the Facebook post said.

The issue of teachers' pay isn't restricted to West Virginia. In Oklahoma, public school teachers are considering a strike over their salaries.

West Virginia teachers are equally unhappy with their employee health insurance program. Tentative agreements on pay did not include a fix to the Public Employees Insurance Agency (PEIA), which employees say requires them to pay premiums that are too high.

A task force on the health insurance issue meets March 13.