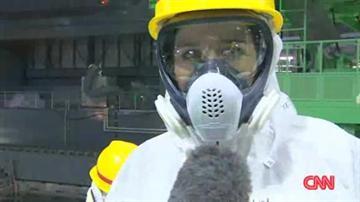 FUKUSHIMA, Japan (CNN) -- After talking about spent nuclear fuel rods at Fukushima for more than two years, it is slightly disconcerting to suddenly be a few meters from them.

Some 1,500 fuel units to be exact, rest in a cooling pool within the damaged Reactor 4 building.

Tokyo Electric Power Co. (TEPCO), the crippled nuclear plant's operator, escorted a small group of journalists including CNN, into the heart of the building to show us the preparations being made for an imminent and crucial operation.

TEPCO says it will start the difficult process of removing this nuclear fuel in the coming days and transport it to a more stable location 100 meters away.

"We have removed large debris (from the pool) and cleaned it with a water vacuum," said plant chief Akira Ono. "But there is a possibility that very small pieces of debris were left behind.

"If they are stuck between the channel box and the rack, we may not remove fuel smoothly, which will affect the operation's smoothness. In that sense, we are concerned."

This would certainly be considered one of the more dangerous areas of the plant to work in.

Half a dozen men were making final checks to the newly installed crane and hook that would lift the fuel rods from the pool into specially built containers for transportation. All are wearing full protective gear with dosimeters in their left chest pockets to monitor their daily exposure.

In the four hours we were on site, our dosimeters showed we were exposed to 0.06 millisieverts, the equivalent of two week's radiation away from Fukushima, a TEPCO official told me.

Driving around the plant, evidence of the devastating tsunami is still perfectly clear two and a half years later. Some building structures remain damaged, as steel girders lie broken and untouched. The cleanup operation is so immense that only essential maintenance is tackled.

We were also escorted to the H4N tank area, the scene of a recent leak of contaminated water. The plant is home to about 1,000 storage tanks, holding the irradiated water that has been used to keep the nuclear reactors cool. From the 400,000 ton capacity, TEPCO says 370,000 has already been used.

Work is also continuing to try and increase the capability of the ALPS water decontamination system, currently a fairly slow process.

Close to the ocean front, we were shown the latest efforts to stop radioactive groundwater from seeping into the Pacific, estimated at around 300 tons a day. The tips of yellow and pink ribbons sticking up from the earth indicate where an underground barrier has been constructed. Liquid cement has been injected into the ground to try and keep the water within the plant itself.

The coming days will be crucial to the efforts to stabilize the nuclear power plant. TEPCO rejected alarmist comments from some quarters that any mistake in removing the spent fuel rods could spark another nuclear disaster.

Ono told reporters on site, "I believe it's nearly impossible."