Wildfire season in California is never a good time but over the past few days, conditions have quick deteriorated, especially in northern California, where the Carr fire has grown tremendously over night. Take a look at some of these videos coming out of this area.

Local firefighters captured this video of the growing Carr fire in Shasta County, California. You can actually see a brief spin-up, or fire-nado, move through the charred landscape and almost cross the street in front of firefighters before fading away.

The fire started last Monday the 23rd around 1:15 pm local time. A mechanical failure of a vehicle is believed to be the cause. It grew rapidly last night, jumping over the Sacramento River and is now bearing down on the northwestern portions of Redding, California.

Unfortunately, this fire has already turned deadly. A redding firefighter and a bulldozer operator have both been killed trying to fight the Carr fire as it continues to push towards the city of Redding, which is about the same size as South Bend. And, at least 15 structures have been burned and 5 others have been damaged. 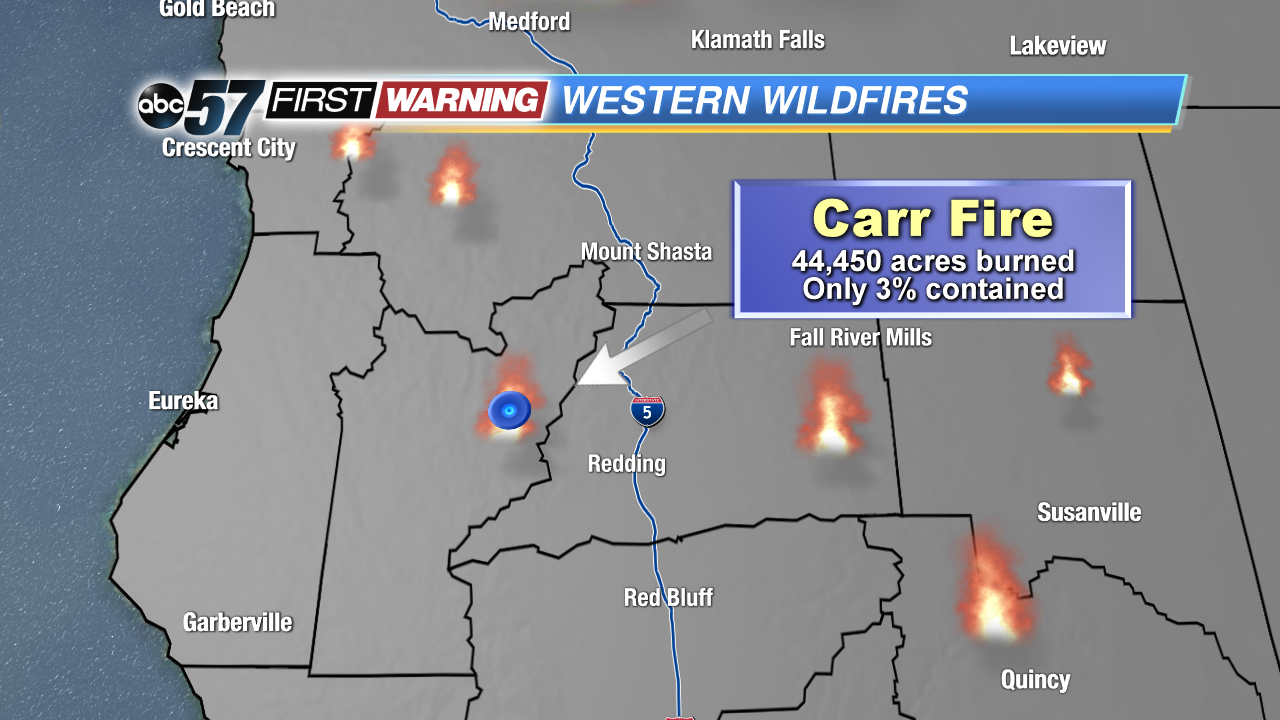 The Carr Fire is just to the northwest of the city of Redding, but it's burning closer and closer to the city.

This situation is very dangerous for the city of Redding in northern California. As of now, the fire is still northwest of town but it is burning closer and closer to the downtown area, with little indication of slowing down. It's already burned 44,450 acres, according to the latest update and is only 3 percent contained. 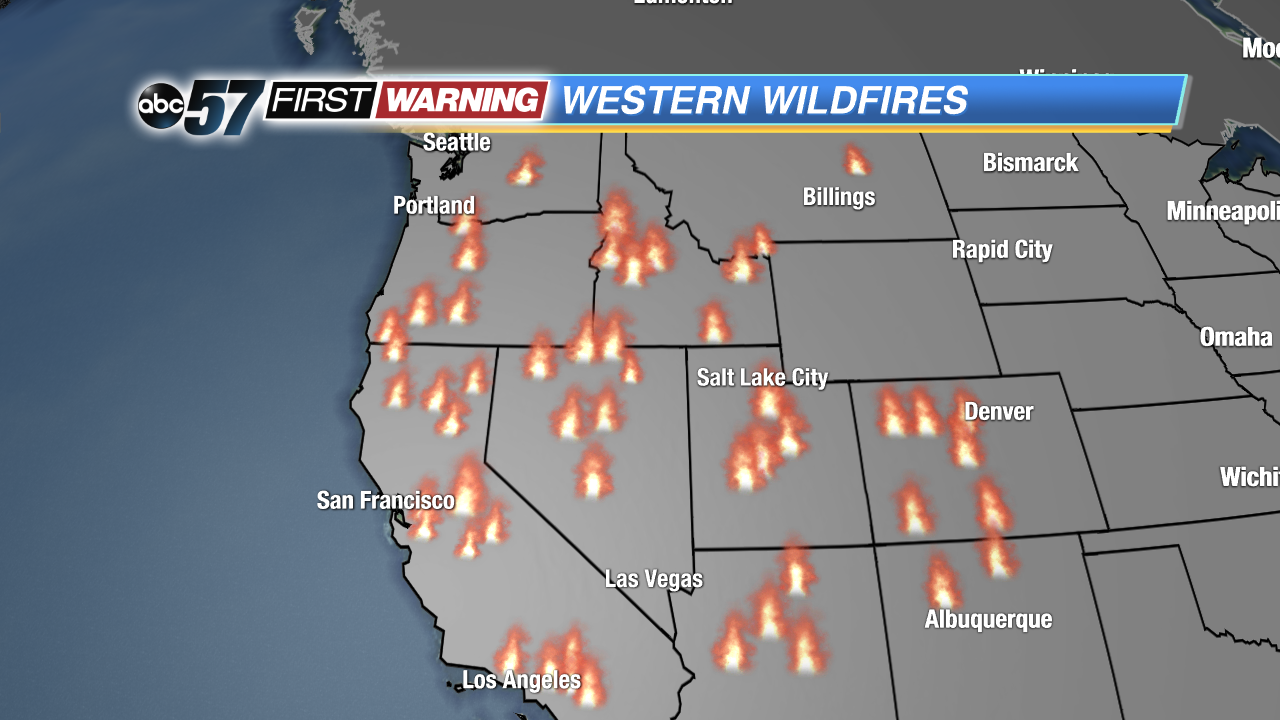 And this is not the only problem in the western United States. Active fires continue from Washington and Oregon, throughout the west coast of California, and back east all the way to the west slopes of the Rocky Mountains.

It's a deadly situation out to the west with all of the wildfires but the smoke from the numerous flames can be seen very clearly on satellite picutres. That smoke could even make its way to us. 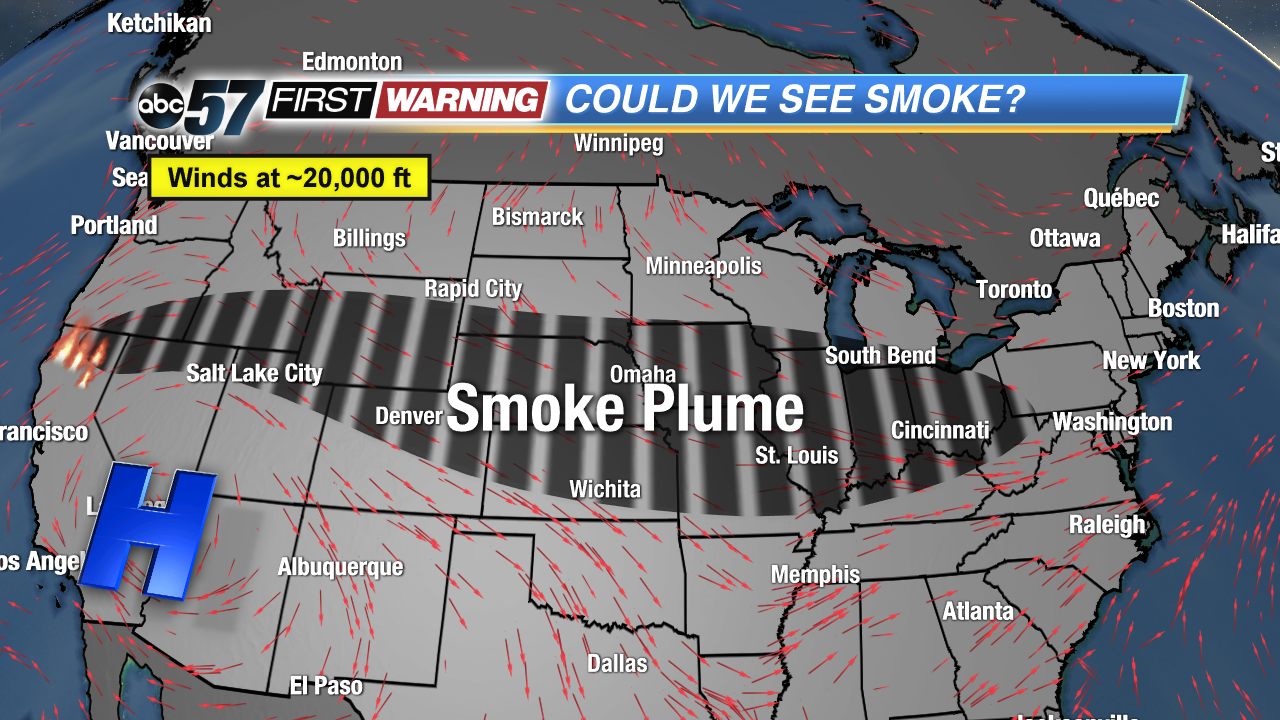 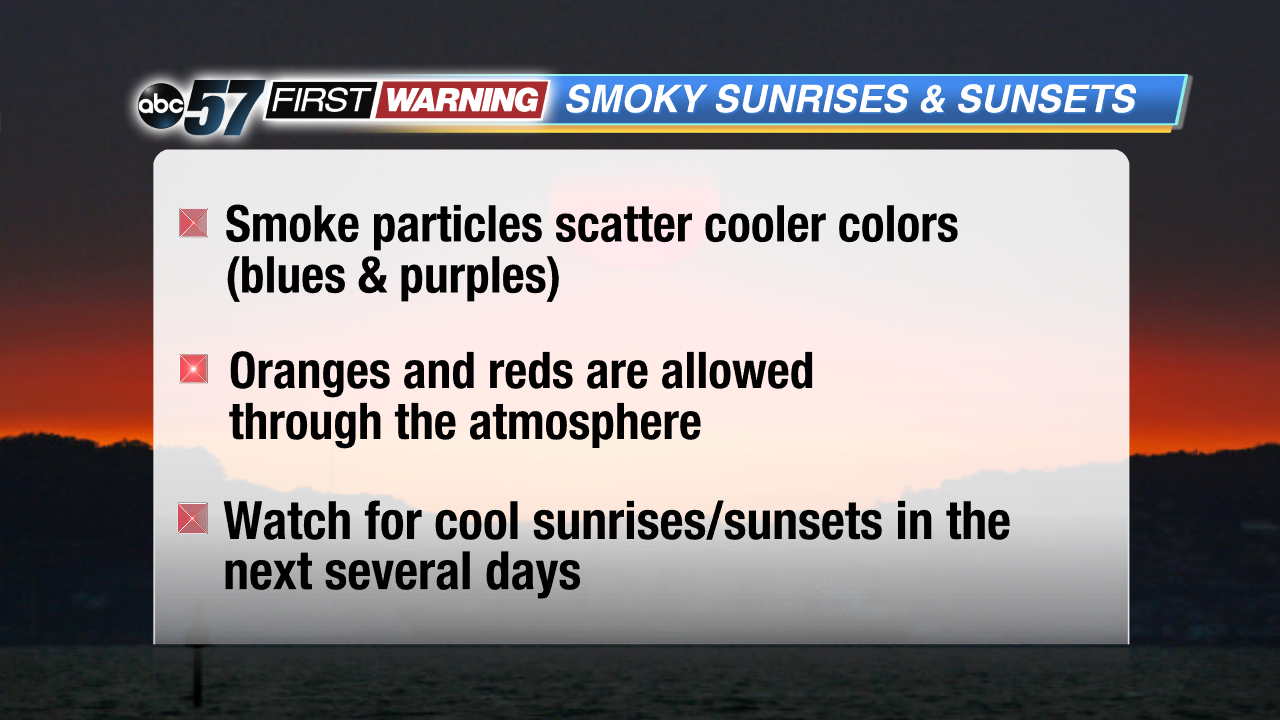 Based on the current wind pattern in the mid-levels of the atmosphere, all of the smoke, not only from the fires along the west coast and northern California, but from southern Canada as well, could slowly shift south and east right over Michiana. You can see this mid-level jet stream placed right over northern California, where the Carr fire is located, snaking into Montana and the Dakotas, down into the central plains and the mid-Mississippi River Valley before hooking up to the northeast into the Great Lakes region. This will most likely take a few days if this jet pattern holds. Air quality mostly likely will not be affected since the smoke will be high in the sky but some smoky sunrises and sunsets are possible if we can get mostly clear conditions in the mornings or evenings. The smoky particles scatter the light from cooler colors like blue, leaving only oranges and reds behind. That probably won't happen until the second half of next week.

Video of the current state of the Carr Fire can be found here: