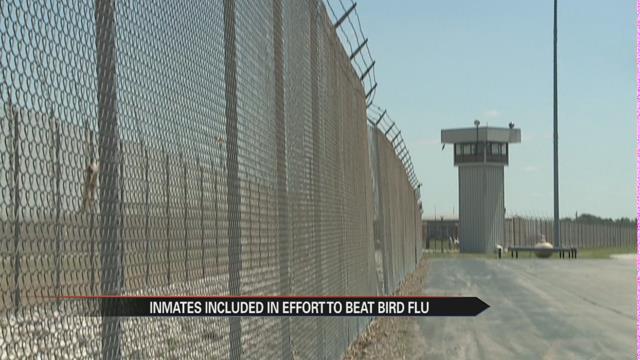 Offenders housed at Westville Correctional Facility are undergoing job training, but it's not quite what you'd normally think. Inmates are learning how to help destroy birds infected with the bird flu.

It's part of the state's efforts to keep the disease contained.

With over 3,000 inmates at Westville, the facility has the labor force needed to control bird populations.

"We are working with the Indiana Department of Corrections to train some low level offenders to help with the depopulation efforts if we have to remove birds from a large facility such as an egg-laying operation,” said Denise Derrer, Public Information Officer for the Indiana State Board of Animal Health.

The highly pathogenic Avian Influenza devastated flocks around the country, and millions of birds had to be put down.

That's an effort the state says takes a lot of man power.

“Some of these larger facilities where there may be one to two to three million birds in a particular facility, so a lot of man hours and just physical labor involved,” said Derrer.

So 50 volunteer inmates will go through emergency training.

“They are going to explain to the inmates just what has to be done in terms of personal protection equipment, and what process needs to be used in order to depopulate any facilities that become infected that raises chickens and turkeys and those types of things,” said John Schrader, Public Information Officer for Westville Correctional Facility.

This isn't the first time the facility has lent its resources to the state.

“We've done it in the past in responding to floods or tornadoes in helping with the clean up after those kinds of disasters.” said Schrader. “This is simply a way for us as a department to provide something back to the communities for the offenders who are incarcerated.”

The State Department of Animal Health wants to make it clear, humans cannot be infected by the bird flu.

But it is highly contagious and could infect an entire flock just from one carrier.