What a difference a year makes 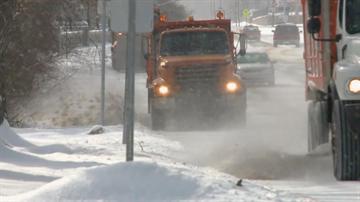 “This time last year, when we had all that snow, this lot took me eight-hours,” described Kurt Rochefort of K & D Hauling, describing plowing the parking lot of Mishawaka’s FOP Lodge on 12th Street.  “Normally this lot takes me an hour-and-a-half to two-hours.”

Though many are praising the weather, which has almost been spring-like at times, snow removal services are praying winter still has some snow in store for this year.

“The money from snow plowing from this year compared to last year, it’s been pretty bad,” Rochefort explained.  “There’s no snow hardly around.”

Before this winter, Rochefort had over $2,000 worth of work done to his own truck to prepare for plowing.  Now he has removed the plows from all the trucks in his fleet.

“We don’t need to carry them around, it costs too much fuel to run them around for nothing,” he explained.

Though numerous snow removal services are hurting, the other part of Rochefort’s business is helping him through the winter.  K & D also supplies roll away dumpsters for construction sites, something they usually can’t do in the winter but have been able to keep up during the warm temperatures.

“It’s usually too cold and too much snow on the ground,” Rochefort explained.  “Now people are roofing, doing construction, cleaning out their garages.”

Still Rochefort and other snow service providers are hoping for at least a few more storms.

"It'd be nice, but the weather doesn't look like we're getting any until maybe the middle of February," he said.

According to the National Weather Service, the average temperature in South Bend for February 1, 2012, was 25-degrees higher than the same date in 2011.