What does Lake Michigan ice mean for Michiana?

NOW: What does Lake Michigan ice mean for Michiana? 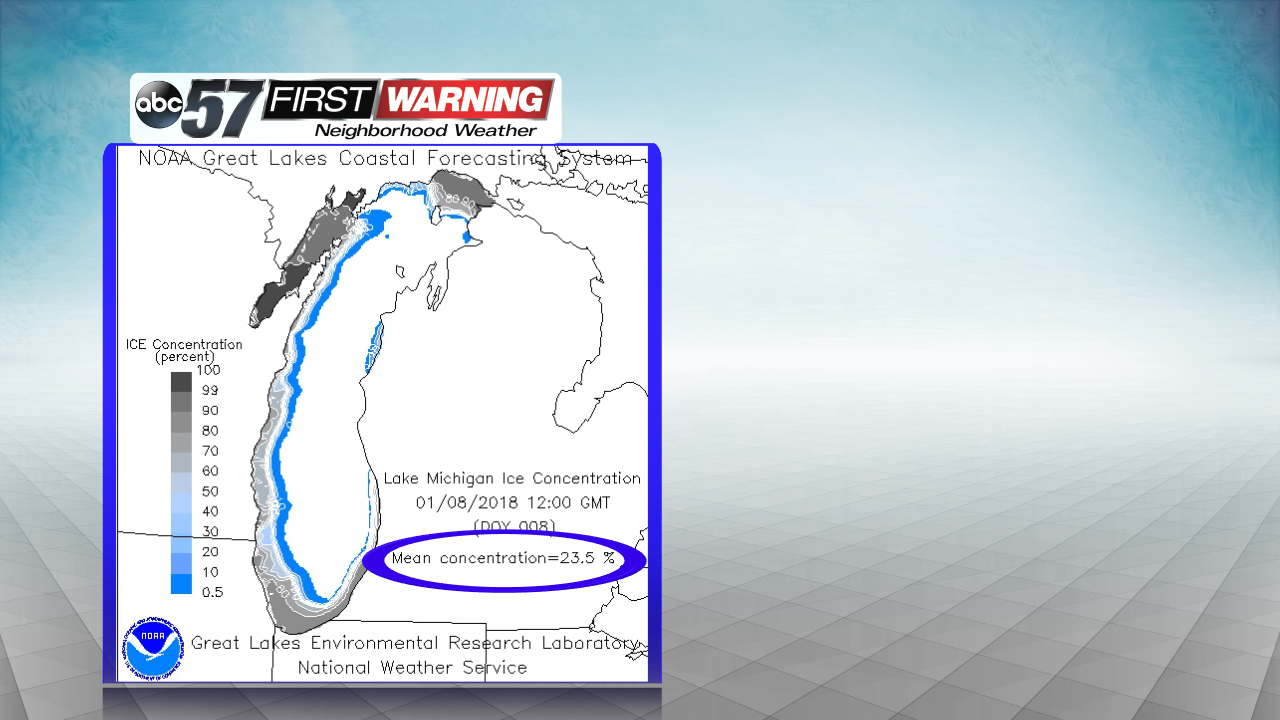 You have probably seen images or videos of the impressive ice cover along the Lake Michigan shoreline over the last few weeks. That's because the ice shelf has continued to grow thanks to that extended streak of days below 20°. In fact, nearly a quarter of Lake Michigan is covered by ice as of Monday morning. The majority of the ice cover and thicker ice cover is along the western side of the lake, where lake ice extends quite a bit from the coast. That is due to the long duration of westerly and northwesterly winds over the last few weeks keeping the waters choppy and warmer over the eastern half of the lake. 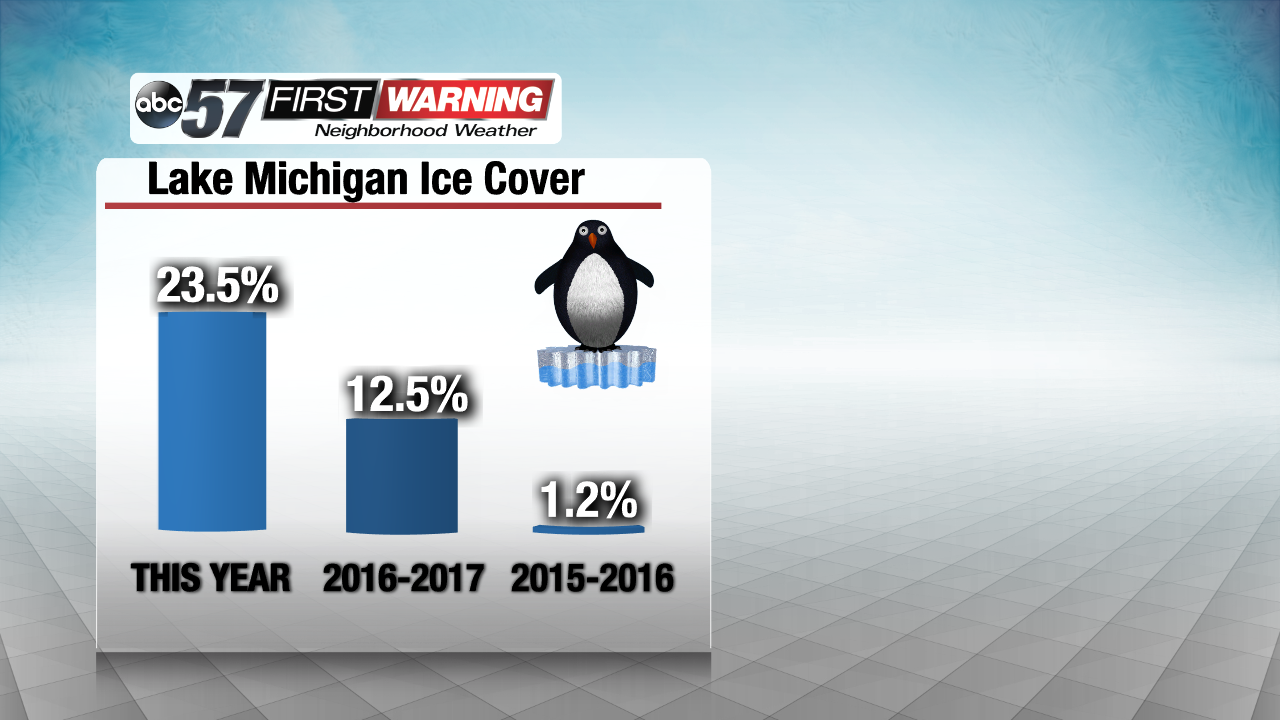 While 23.5% may not seem like a lot of real estate, it is quite a large number when comparing it to the ice coverage at this time last year and two years ago. We have nearly doubled the ice cover as of this morning compared to January 8th of 2017. Going back to 2015-2016, only 1.2% of Lake Michigan was covered by ice. None of that 1.2% was seen along the lake shores of La Porte or Berrien Counties. Of course, that winter was quite mild and lacked a significant stretch of brutal cold. 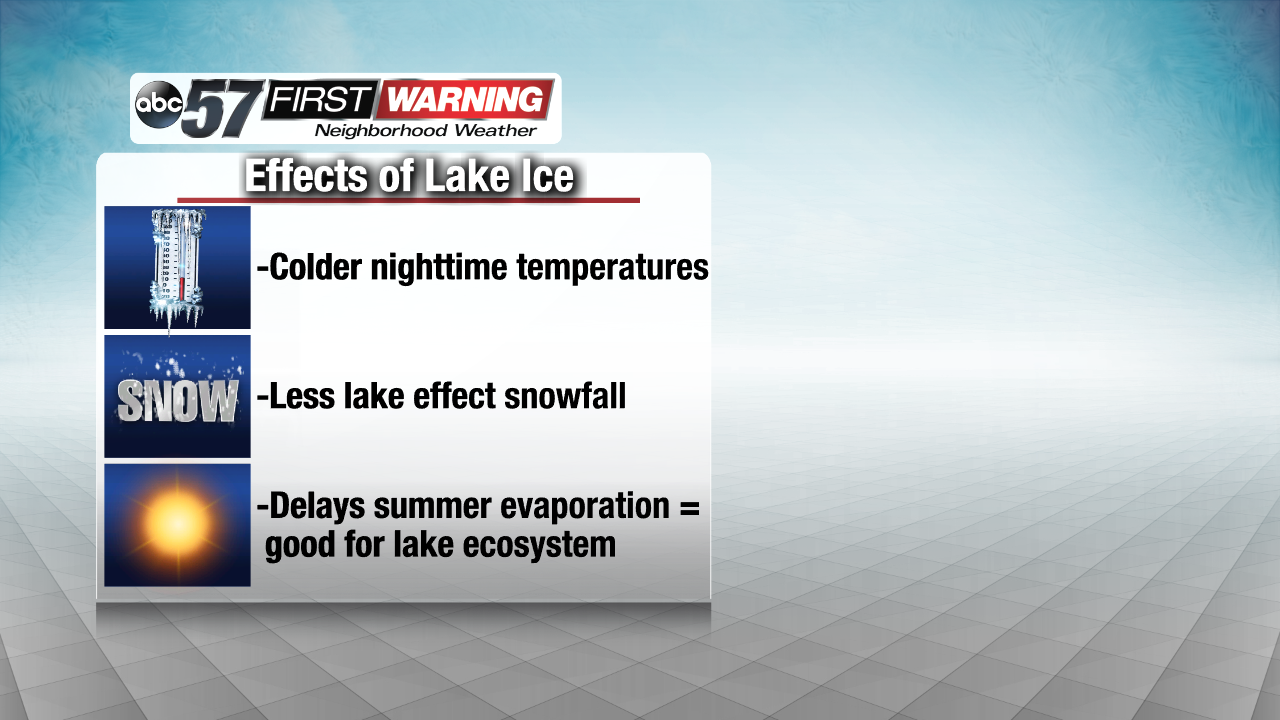 So, what does all of this mean? Well, lake ice can have a number of effects on the weather we experience in Michiana. The biggest effects are colder nighttime temperatures and a reduction in lake effect snow. If there is ice covering the open water of Lake Michigan, we don't see the effects of the "lake blanket" at night. When the waters are not frozen, they can help keep temperatures up at night by forming a lake effect cloud deck as winds move over them. If the waters are frozen, we don't see as much in the way of lake effect cloud cover at night. As a result, the likelihood of seeing colder nights increases.

A less talked about effect of lake ice is the benefits it can have on the lake ecosystem. If sufficient ice develops on the lake, there is a delay in the effects of summertime evaporation. That can have positive effects and results on the ecosystem of the lake, as well as the wildlife in and around the lake.