What does the Confederacy mean in modern America? 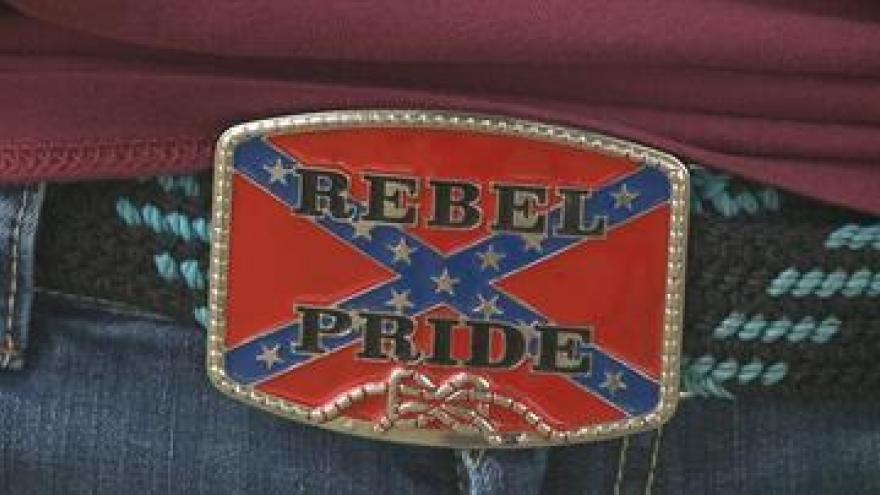 (CNN) -- Dylann Roof's writings were alarming enough, but a photograph of the white supremacist holding a Confederate battle flag and a handgun was hauntingly prescient.

In June 2015, Roof gunned down nine African-Americans he joined for Bible study in Charleston, South Carolina. Horrified communities in the United States -- especially in the South -- began to push for the removal of Confederate monuments and symbols. One such initiative brought white nationalists and others to Charlottesville, Virginia, last weekend to protest in a park home to a statue of Confederate Gen. Robert E. Lee. Violence ensued in the college town, leaving an anti-racism protester dead.

Scenes of people fighting in city streets raises the question of what the Confederacy -- formally the Confederate States of America -- means in modern America.

The answer: It's complicated.

What was the 19th century Confederacy?

Let's start with what most people associate with the Confederacy: The American Civil War. The Southern states seceded from the United States for several reasons -- but most historians point to two:

The Southern economy depended heavily on the labor of slaves. The election of Abraham Lincoln as president and congressional moves to stop the spread of the institution brought a crisis that would be solved by guns and bayonets.

The Confederacy was an "escape hatch" for the white planter elite to preserve their way of life, said Gordon Jones, senior military historian at the Atlanta History Center. "They are saying, 'Our liberty rests on this ... servile class so we can achieve wealth and prosperity.'"

Some scholars and so-called Southern "heritage" groups contend the primary cause of the Civil War was the preservation of states' rights. The argument goes that the Union is a compact, and that membership can be annulled for perceived wrongs or a tyrannical central government.

Americans still debate this. A Pew Research Center survey, conducted in 2011, found no consensus on the war's cause, with mainly about states' rights (48%) and slavery (38%) leading the list, followed by both equally, at 9%.

Many supporters of Confederate monuments argue they honor the sacrifice of men who were protecting their way of life, not slavery. But historians counter this, saying documents from that time showed that the Confederacy was built upon preserving slavery and if the conflict was mainly about states' rights, it was the right to have slaves.

Of yeoman farmers, Jones said, "They are afraid if the slave system is done away with... the social order will be upset" and there will be a mixing of races.

When did the monuments begin to go up?

Relatively few monuments went up in the South in the first 25 years after the war ended in 1865. The economy and social order were just too devastated.

In the late 19th and early 20th century, groups such as the United Daughters of the Confederacy and Sons of Confederate Veterans built monuments that promoted the "Lost Cause" ideology.

"White Southerners had told themselves a story in which slavery did not play a leading role," Edward Ayers, a historian and former president of the University of Richmond in Virginia, told PBS' Newshour. "The story was that men like Robert E. Lee had risen up to fight against a tyrannical federal government that was trying to take away the rights of the states."

Money for monuments was raised all across the region. "Sometimes they were grand.... all the way to the little solitary soldiers that stand in front of isolated courthouses all across the South," Ayers said.

What does the Confederacy mean today?

For some it's heritage; for others, hate

"For some people, it is heritage, something their ancestors fought for or otherwise supported," he said. "Although the last Confederate veteran died over 60 years ago, descendants still value the sacrifice of those men and their families."

Others see it as a symbol of hate.

"Even if these individual (Southern) soldiers were not slaveholders, they were fighting to defend a nation that was based on slavery," Ayers, the historian, told PBS. "Forget for a moment whatever might have motivated these men to have fought. The fact is had they won you would have had an independent nation overseeing the largest and most powerful system of slavery in the modern world."

It means the debate will go on

It's not just depictions of Southern soldiers in metal or bronze that have elicited visceral responses.

Champions of the Confederate battle flag argue it's a symbol of Southern culture, and need not be erased. Critics say it's a racist symbol that represents a war to uphold slavery and, later, a battle to oppose civil rights advances. The banner was removed from Capitol grounds in South Carolina in 2015 after Roof killed the Charleston worshippers.

It's important that society acknowledge that prejudice played a part in the proliferation of monuments, Crawford said.

Jones said for some defenders, it's not about overt racial prejudice. Rather, he said, some argue that life in the South really wasn't that bad, a stance that can be a slippery slope.

"The Confederacy is often associated with being a rebel, as in somebody who does not take to authority very easily. We see it used sometimes in Europe not to represent white supremacy [but) to being a cutup, riding a motorcycle, a nonconformist," Jones said.

Where does the US go from here?

The pace of monument removal has quickened in recent months, though opponents are seeking legal avenues to stop such moves. The removal of four monuments from public spaces in New Orleans stunned historians who thought, after six years of debate, that the day would never come.

Ayers stresses that history is often reinterpreted, especially after more than 150 years. He understands why some want to remove Confederate monuments, or provide context.

"If people understood why these monuments were put up.... It could play an instructive role."

For all the emotions, anger and fear engendered by the situation in Charlottesville, "You have got to say the fact we are having this conversation .... 150 years after (the Civil War) is actually a good thing," Jones said.

America is having a much more civil discourse than in 1860 and 1861, on the eve of the Civil War. "Two sides are not concentrated in two geographic conditions," Jones said.

It is healthy to debate how the republic should function, how a government is administered by the consent of the governed, he said.

"The problem is we polarize over it and it turns violent."