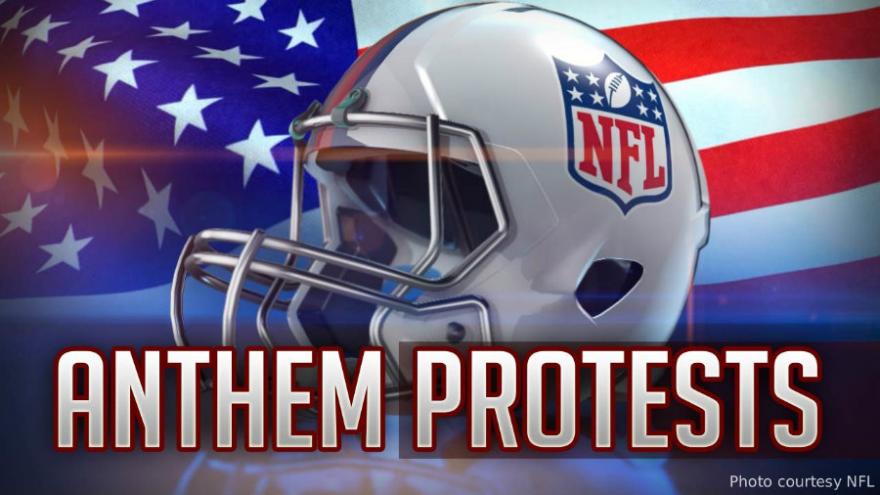 (CNN Money) -- Fox and ESPN will not be airing the national anthem live during this weekend's NFL games.

Fox said the network won't be showing the anthem live, but that the cameras "are always rolling so if something happens, we will be sure to cover it." ESPN also said it would not air the anthem live Monday night.

CBS declined to comment and NBC did not respond.

The anthem is not usually aired live apart from major events, but networks broadcast them last month after President Trump publicly fumed about NFL players who took a knee during the "Star Spangled Banner" to protest treatment of black Americans, particularly by police.

The networks moved off the anthem broadcasts last weekend, but Vice President Pence walked out of an Indianapolis Colts game on Sunday when some members of the San Francisco 49ers took a knee, and brought the debate back into the spotlight.

"I left today's Colts game because @POTUS and I will not dignify any event that disrespects our soldiers, our Flag, or our National Anthem," Pence tweeted on Sunday.

Pence added that while everyone is entitled to their own opinions, "I don't think it's too much to ask NFL players to respect the Flag and our National Anthem."

Also on Sunday, Dallas Cowboys owner Jerry Jones told reporters that any player who "disrespects the flag" will not play. Jones' comments prompted ESPN's Jemele Hill to speak out.

"Jerry Jones also has created a problem for his players, specifically the black ones. If they don't kneel, some will see them as sellouts," Hill tweeted on Sunday.

She later tweeted, "If you strongly reject what Jerry Jones said, the key is his advertisers. Don't place the burden squarely on the players."

Hill was suspended for two weeks for violating ESPN's social media guidelines and President Trump used the Twitter flap to attack her and the network. The suspension exposed ESPN to new criticism and sparked debate about how journalists and commentators should conduct themselves on social media.

The protests started in 2016 with San Francisco 49ers quarterback Colin Kaepernick, but they made headlines again in September when Trump targeted the league in a fiery stump speech in Alabama. The controversy is also coming at a time when the NFL is suffering from down ratings. Through week five, the league's viewership is down roughly 6% compared to the same time last year. Thursday night's game was up 7% in overnight ratings compared to last year. NFL games still amass the biggest ratings on TV.

NFL commissioner Roger Goodell sent a letter to team executives this week saying that the dispute "is threatening to erode the unifying power of our game."

"Like many of our fans, we believe that everyone should stand for the National Anthem," Goodell wrote. "We want to honor our flag and our country, and our fans expect that of us."

President Trump praised the Goodell for taking a stance on the national anthem, but the league quickly corrected him without saying his name.

"Commentary this morning about the Commissioner's position on the anthem is not accurate," the NFL said. "As we said yesterday, there will be a discussion of these issues at the owners meeting next week. The NFL is doing the hard work of trying to move from protest to progress, working to bring people together... Players from around the league will be in New York next week to meet with owners to continue our work together."