When a tree falls on your car, who pays? 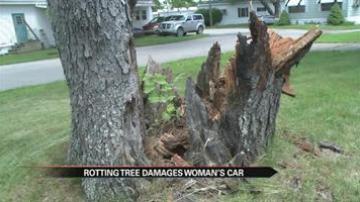 NILES, Mich. -- A resident of Ontario Place in Niles Michigan says the storms that came through last week caused a tree to fall on her car. The victim says the tree was rotten so she shouldn't have to pay for repairs. Because the tree had leaves on it, management's insurance won't pay.

A storm that came through last week knocked a tree onto Patricia Potts' 2005 Chevy Cavalier.

Her insurance company is giving her some money, but she says because she's retired and on a fixed income, she won't be able to replace it with something comparable.

She says this isn't the first time it has happened. Three years ago, a portion of the same tree broke off and fell on her car during a storm.

She called management to complain, but they say they don't have any record of it.

"If spontaneous combustion could happen right now, I would be on fire I'm so angry," said Potts.

We looked at the tree and saw what appeared to be black rot. It crumbled easily.

The manager admitted never having seen the tree herself because of a disability. She said the section that fell on Potts' car three years ago was rotted.

But they say there's nothing else they can do for Potts.

The manager said maintenance has done more than enough to help her out. She says they removed the tree from her car, which is something they're not legally required to do.

"Even that handyman looked at their tree and saw it was rotted," said Potts.

Potts is upset and unsure of what to do.

She's not asking the owner or management to buy her a brand new car, but feels she's owed something.

The park's insurance company never came out in-person to evaluate the tree.

Management said they made their decision based on a few pictures.