Where will Irma go? It's hard to tell 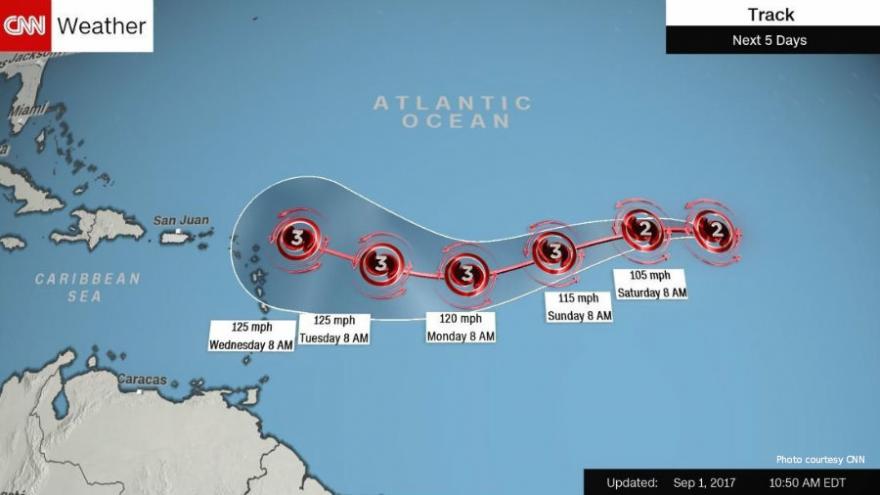 (CNN) -- Hurricane Irma is swirling in the Atlantic, posing a threat to parts of the Caribbean and denying forecasters a chance to catch their breaths after Hurricane Harvey.

By Sunday morning, Irma had strengthened to a Category 3 hurricane, with winds nearing 115 mph (185 kmh), the National Hurricane Center said.

On Sunday afternoon, Irma's center was about 790 miles east of the Leeward Islands, a group of islands in the West Indies that start east of Puerto Rico. Tropical-storm-force winds from Irma would most likely begin in the Leeward Islands on Tuesday night, and the storm is expected to be near the northern Leeward Islands by late Tuesday.

Hurricane watches have been issued for the islands of Antigua, Barbuda, Anguilla, Montserrat, St. Kitts, and Nevis. Additional hurricane or tropical storm watches may come as soon as Monday for the British and US Virgin Islands and Puerto Rico on Monday.

"Irma is expected to impact the northeastern Leeward Islands by the middle of this week as a major hurricane, accompanied by dangerous wind, storm surge, and rainfall impacts, along with rough surf and rip currents," the agency said.

Irma is expected to remain a "dangerous major hurricane" throughout the week and could directly affect the British and US Virgin Islands, Puerto Rico, Hispaniola, Turks and Caicos, and the Bahamas, the agency said, warning that residents of the Lesser Antilles should monitor the hurricane's progress.

But it's too soon to know the impact Irma could have on the continental United States, where no warnings or watches are currently in effect, the agency said.

"Regardless, everyone in hurricane-prone areas should ensure that they have their hurricane plan in place, as we are now near the peak of the season," the hurricane center said.

Read: Hurricane Irma could be next weather disaster

Threat to the US

CNN meteorologist Taylor Ward also said it was too early to predict Irma's threat to the United States.

"As for what we do know, the system will approach the northern Leeward Islands late Tuesday or early Wednesday, likely as a major hurricane of Category 3 or more. It's still unclear if these islands will take a direct hit or just be brushed by the outer bands of the storm," he said.

"Beyond the northern Leeward Islands, the storm could approach the Turks and Caicos and Bahamas by late week, but again nothing is certain for these regions."

"How hard the storm turns and where this occurs will determine what portion of the US is the most at risk. It is also still entirely possible that the storm approaches the Bahamas and then turns sharp enough to stay out to sea. The storm is expected to be a major hurricane, so it would still bring high surf, erosion, and rip currents to much of the eastern seaboard, but staying offshore is obviously the best case scenario."

If Irma made landfall in the United States it would likely not be until late next weekend at the earliest, he said.

Irma was designated a tropical storm Wednesday morning, and by Thursday afternoon, it had strengthened, with winds of 115 mph.

Irma is a classic "Cape Verde hurricane," a type of hurricane that forms in the far eastern Atlantic, near the Cape Verde Islands (now known as the Cabo Verde Islands), then tracks all the way across the Atlantic, CNN meteorologist Brandon Miller said.

Cape Verde storms frequently become some of the largest and most intense hurricanes. Examples are Hurricane Hugo, Hurricane Floyd, and Hurricane Ivan.