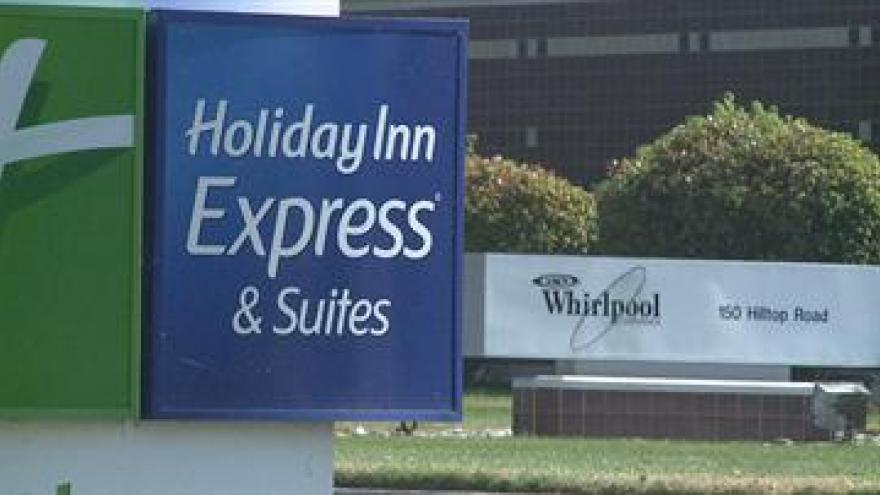 ST. JOSEPH, Mich. -- On Monday, Whirlpool Corporation informed some employees that they will be laid-off as part of efforts to “streamline” operations.  Employees from locations across the US and Canada, including St. Joseph and Benton Harbor, will be let go.  On Tuesday, Whirlpool employees met in private with leaders to discuss the changes.

“This is a difficult, but necessary adjustment as we address a volatile marketplace in which demand for major appliances is currently at recessionary levels,” a press release from Whirlpool stated.

With the news of the layoffs, owners of businesses surrounding Whirlpool offices have been left wondering what effect layoffs will have on them.  Hotels, shops, and restaurants close to offices often depend on the business they bring in from Whirlpool employees.  Across the street from Whirlpool’s offices on Hilltop Road is the Cozumel Mexican Restaurant, which counts on Whirlpool for most of its business.

“We’re more busy during lunchtime than we are during dinner and that’s because of most of the employees that come across the street,” explained Karen Zamacona, a server at Cozumel.  “Thursdays and Fridays we usually have big parties of over 8 or 10 and usually all from Whirlpool.”

Zamacon explained that anywhere 8 out of 10 customers they serve are Whirlpool employees and it’s the same for other nearby businesses, the Holiday Inn Express right next to Cozumel also depends greatly on Whirlpool business.

“We also have a lot of tourists, also from Whirlpool that come from New York,” Zamacona explained.  “They will come and eat dinner here too and stay at the Holiday Inn.”

For the employees at those businesses, news of layoffs brings anxiety.

“I’m worried because if that’s going to happen I don’t know how slow we’re going to get during the winter,” Zamacona explained.  “We get our income from them coming here to eat lunch.”

Cozumel Mexican Restaurant’s owner Jorge Vargas says often the restaurant can only stay open during winter, when tourism dies off, because of the Whirlpool business.  Now, he’s uncertain of what will happen with the layoffs.

The question on many business owners minds in St. Joseph and Benton Harbor are which departments the layoffs will come from.  Whirlpool hasn’t yet released the information on who will be laid-off and how many employees will lose their jobs.  That information is what Jorge Vargas wants.

“I would like to know the numbers, that way we can prepare,” Vargas explained.  “If we have numbers then we can say it will affect us 30-percent, 20-percent or 50-percent, it depends on how many people they layoff from the people we get coming in here.”

Karen Zamacona explained that the anxiety felt at the nearby businesses, should be felt across the area.

“It will not just affect us, it will affect the whole community here in St. Joe,” she explained.

Officials with the City of St. Joseph declined to comment on what repercussions the layoffs will have until they get a chance to see the numbers.  According to a press release the company will not be providing details of their changes for specific office locations.