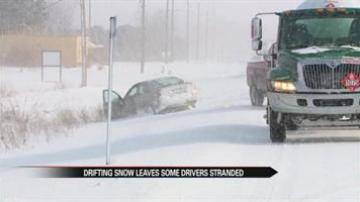 We spoke with a couple people who slid into a ditch on US12 this afternoon.

"A semi pulled out in front of me and took up both lanes. I couldn't pull around him or anything so I had to kind of stop. And my car went that way and then that way and I'm lucky I missed the poles on the side of the road," said Jodi Mosier.

With the help of her stepdad and Bertrand Township Fire, Mosier's car made it out of the ditch and back on U.S 12.

But she gave up on getting to class.

"I thought that they were going to cancel school and I'm kind of upset that they didn't since I risked my life to go there and I know my accident is not as bad as everybody else's that have been here so far," said Mosier.

So many other drivers found themselves in the same situation that Michigan State Police started shutting down roads.

"With the white out conditions on I-94, we've had numerous crashes, numerous jack-knifed semis and we just had to shut down I-94 eastbound between mile marker 16 which is the Bridgeman exit and mile marker 23 which is up near Stevensville," said First Lieutenant Mike Dawson, Michigan State Police, Niles Post commander.

Plus the entire regular shift is out patrolling the roads and assisting with crashes.

"The biggest problem is we have white-out conditions and we have ice on the highway. If people are driving too fast and then when something happens in front of them they can't avoid it and go into the median, or the ditch, or there's a collision," said Dawson.

Melodi Reith also went into a ditch. Her PT Cruiser is facing the opposite direction she was headed.

"It was ice obviously and my car started to slide, so I tried to stop it from sliding and it didn't work and my back end flipped around and I slid off the road," said Reith.