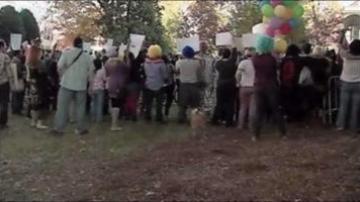 CHARLOTTE, N.C. -- It was an odd scene over the weekend in North Carolina.

A KKK rally turned colorful when counter-protesters show up.

The counter-protesters at Saturday’s National Socialist Movement and Klan rally out-numbered the supremacists 5-1.

While answering chants of white power, they poured out white flour. Even some city officials joined in on the counter-protest.

One councilman even who wore a clown nose.

Police say no arrests were made.