Why presidential debate could make or break election. 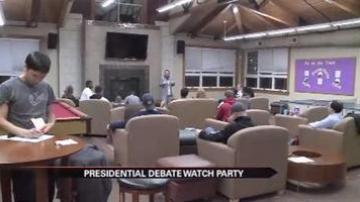 According to political analyst Elizabeth Bennion, Wednesday night's debate could make or break the election.

"They just need to change a few people in a few key states who are swing voters that could go either way," said Dr. Elizabeth Bennion IUSB Director of American Democracy Project.

"In 2008, I was for President Obama and he made a lot of promises that he did not necessarily come through with, but I understand that the economy does not recover over night," said IUSB student Matthew Kavanaugh.

"In 1960 obviously with the Kennedy/Nixon debate, Nixon looked old and tired and people did not know that much about Kennedy before the debate and that was a game changer," said Bennion.

With the current president leading in the polls as well as the swing states, Bennion said Mitt Romney will really have to step up to the plate if he wants to win.

"Right now Barack Obama is in the lead, which means the importance of the debate is especially for Mitt Romney," said Bennion.

But she said the only way either candidate can knock this debate out of the park is to capitalize on the economy.

Now we see a statistical dead heat when asked whether Barack Obama or Mitt Romney will do a better job handling the economy.