Why the near-zero severe threat?

NOW: Why the near-zero severe threat? 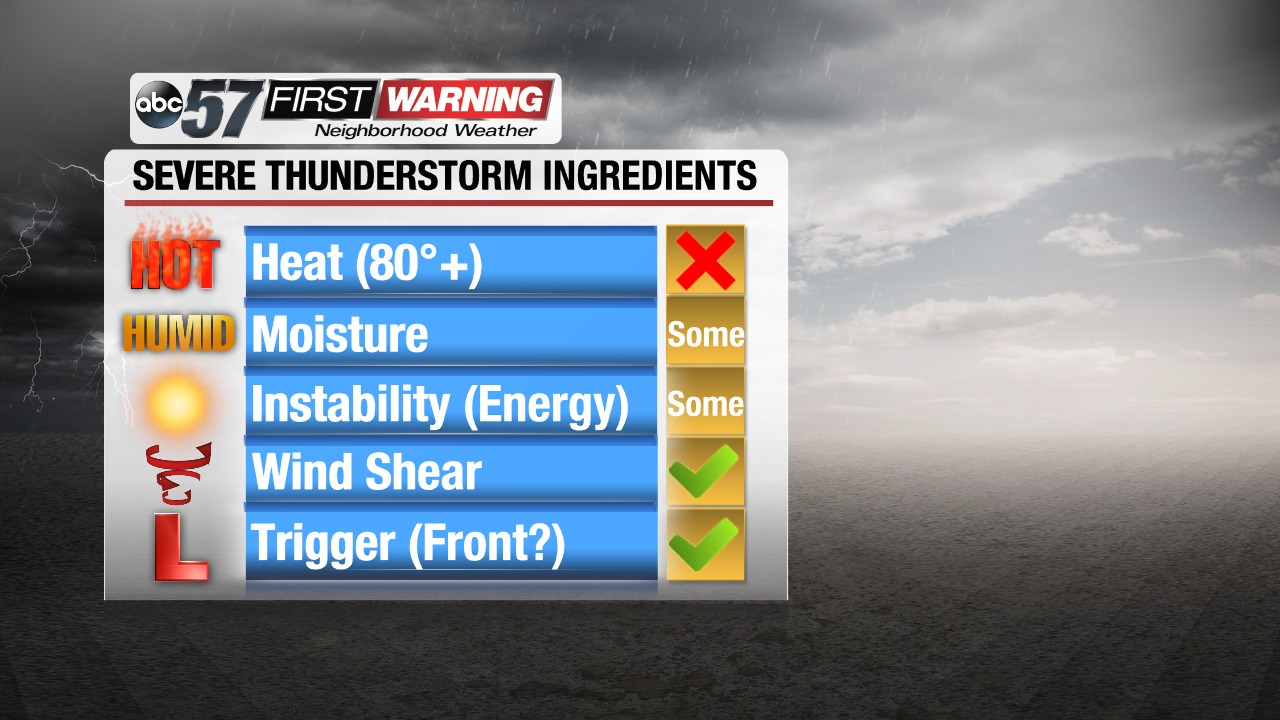 Over the last 48 hours, we have been mentioning the risk of a strong to perhaps severe thunderstorm in Michiana on Thursday. That threat was minor due to some of our thunderstorm ingredients lacking a bit. As of this morning, the threat looks even lower thanks to the lack of heat, high humidity and sufficient energy. Those ingredients aren't exactly terrible, but they are not as present as we would like them to be for a more significant severe weather threat.

Two ingredients that certainly will exist are wind shear and a "trigger." Wind shear is needed for thunderstorms to develop, strengthen and maintain themselves as they move in any given direction. Our wind shear values in Michiana will be high for late July. The "trigger" is simply the cold front that is moving through the area this morning. Oftentimes a severe weather threat is limited if there's no "trigger," such as a cold front, an area of low pressure or another type of boundary. 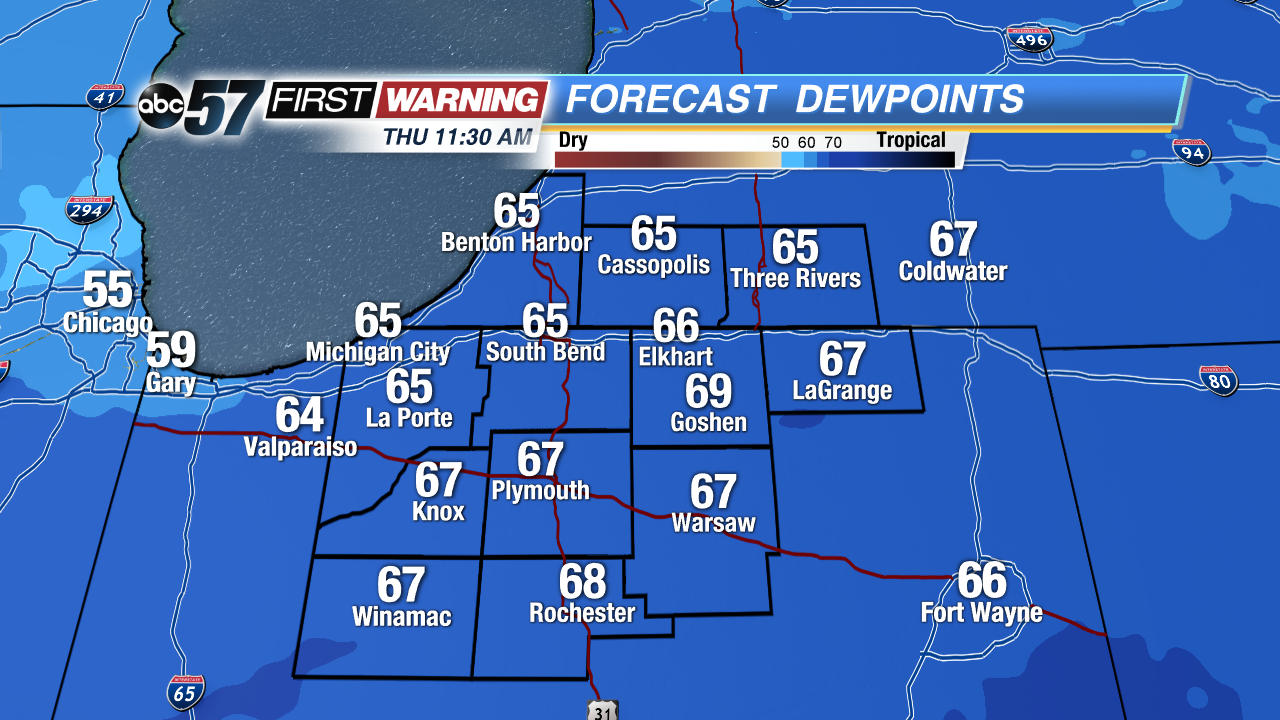 Maximum dew points expected Thursday.
Let's look at two of the variables that won't exactly be off the charts. Moisture is a necessity for severe weather here in Michiana. When gauging the amount of moisture in the atmosphere, meteorologists look at the dew point temperatures. If these exceed 65°, they are considered sufficient for stronger thunderstorms. When they rise into the upper 60s and 70s, though, they are much more supportive of severe thunderstorms. Our dew points will likely peak in the 64-68° range late Thursday morning. Typically this would be enough for thunderstorms. However, with actual air temperatures only expected to be around 70° or so late this morning when the front passes, the effect of moisture content will be subdued slightly. 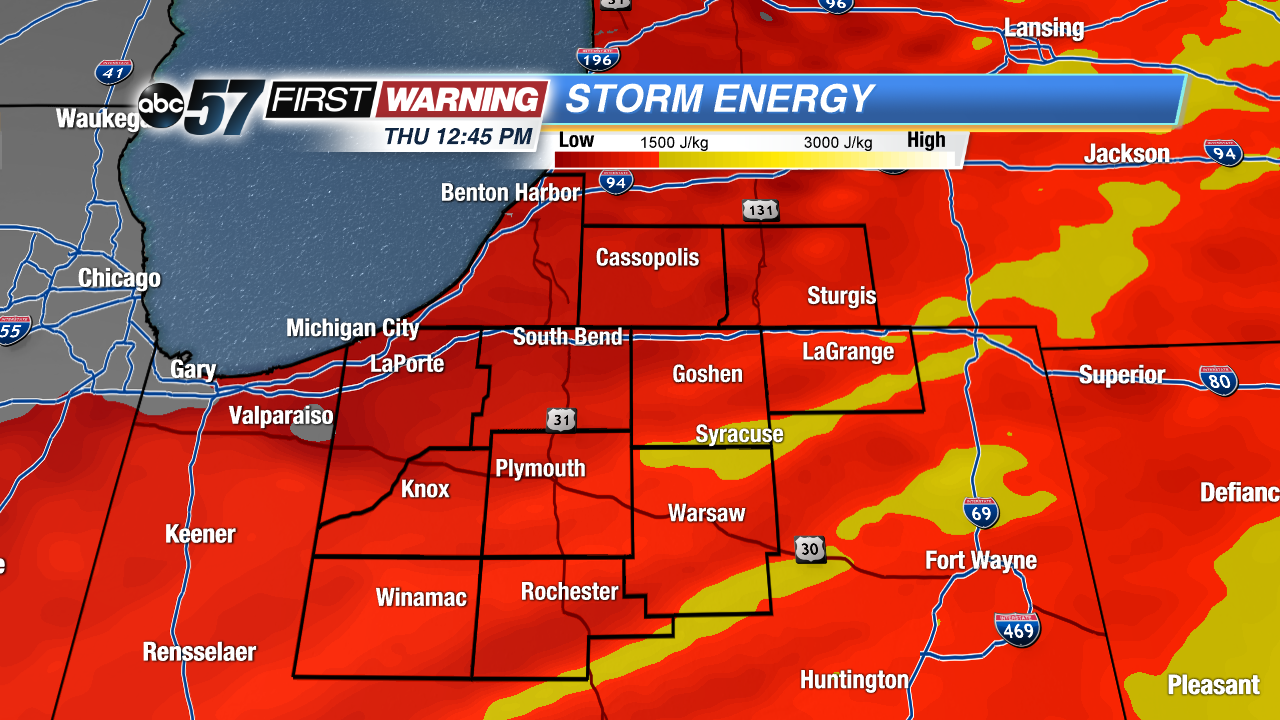 Another limiting factor is one that was just mentioned: the timing of the frontal passage. When cold fronts and other boundaries move through at night or early in the morning, they cannot capitalize on the heating of the day. If a cold front barrels through during the afternoon or evening, there's much more heat and moisture available to interact with for thunderstorm development. For today, the front will push through much of Michiana before 11 AM. The result? An overall lack of heating, which means less-than-ideal storm energy (also called CAPE or instability). Notice the yellows on the storm energy map. They are off to the south and east. That's where the higher storm energy values and higher storm threat will reside early this afternoon.

Thus, locations like Rochester, Warsaw, Syracuse, LaGrange, and Fort Wayne will have the highest chance of any thunderstorms between 12pm and 3pm. And, because the front will not arrive in those locations until the early afternoon, more heating and moisture increases will be allowed to take place than in locations like Plymouth, South Bend, Elkhart, Knox, La Porte, Cassopolis, Niles, and Benton Harbor/St. Joseph.