Why Trump is attacking Germany over trade 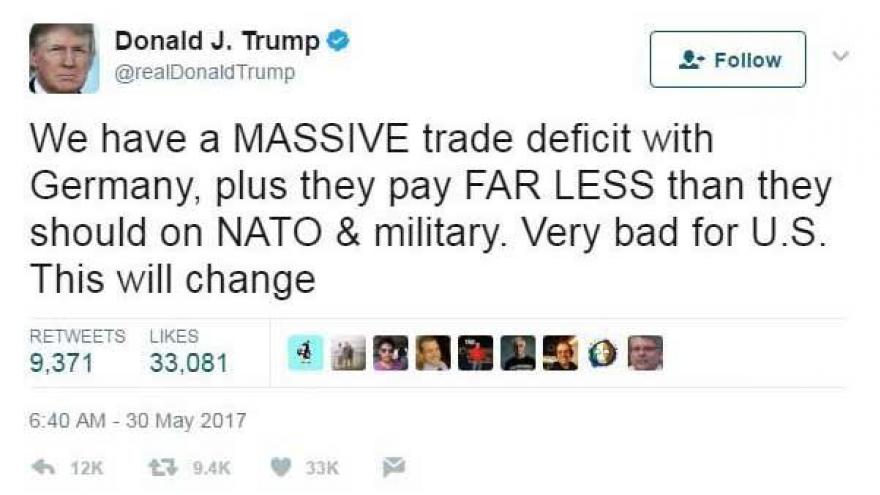 NEW YORK (CNNMoney) -- President Donald Trump is aiming his wrath over trade at one of the largest buyers of American exports -- Germany.

Trump says he's upset because of the large trade gap the United States has with Germany, as well as how much Germany spends on its military.

"We have a MASSIVE trade deficit with Germany, plus they pay FAR LESS than they should on NATO & military. Very bad for U.S. This will change," Trump tweeted on Tuesday morning.

Trump is right -- in 2016 the U.S. trade gap with Germany was $67.8 billion, the second largest in the world. America's trade deficit with China, at $310 billion, was the only one larger.

But Germany also bought $80.4 billion worth of American goods and services last year, more than was purchased by any other European country other than the United Kingdom.

And it's not a free trade deal or low wages in the foreign country that's responsible for this trade gap. In the case of Germany, it's mostly due to the weak euro.

Even Trump's top economic adviser, Gary Cohn, pulled back on the idea that Trump had any specific problem with German trade policy, despite his statements and tweets.

"He said they're very bad on trade but he doesn't have a problem with Germany," Cohn told reporters during Trump's nine-day trip overseas.

Earlier this year another Trump administration official pointed to the "grossly undervalued" euro as an unfair advantage for German goods.

Peter Navarro, an economist who serves as the head of Trump's National Trade Council, made the complaint in an interview in the Financial Times shortly after Trump took office.