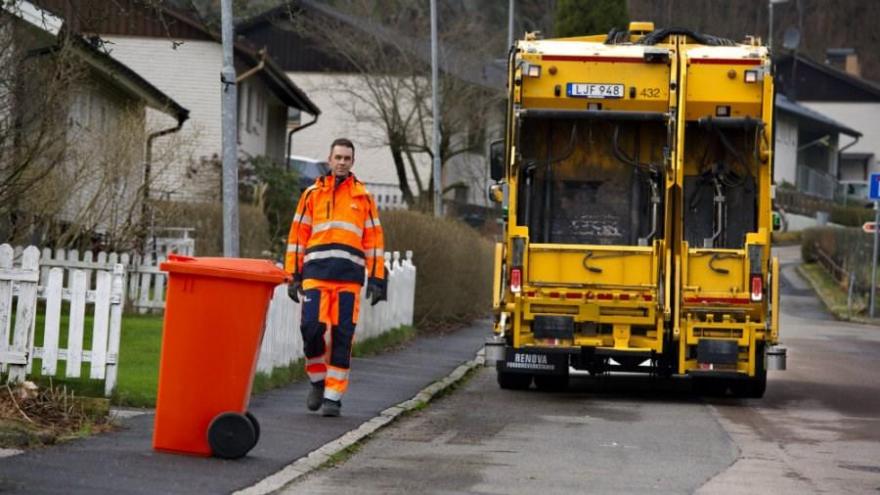 The self-driving truck backs down streets in reverse and periodically stops so a garbage man can load it with trash. Volvo will begin tests on a closed course next month, and will shift to public streets in late autumn.

With the new truck, the garbage man won't have to be constantly jumping in and out of the driver's seat to empty trash bins. Instead, he'll stay near the rear of the vehicle and walk down the street ahead of the truck's path as it backs up.

Volvo Trucks chief technology officer Lars Stenqvist expects to see an efficiency benefit. If the garbage man walked ahead of the vehicle as it drove forward, time would be wasted returning to the rear of the truck to load trash.

Expected gains in productivity, safety and efficiency are why Volvo and others in the transportation industry are developing autonomous systems. Volvo Trucks, a subsidiary of Volvo, is partnering with Swedish waste management company Renova on the project.

The Volvo truck navigates the streets with the help of four laser sensors called LIDAR, which serve as the eyes of the autonomous vehicle. Initially, Volvo and Renova will map a neighborhood's streets, so that the garbage truck knows exactly where to stop to pick up trash.

During a shift, a garbageman would manually drive the truck to the end of a block. Then he puts the truck in autonomous mode, and begins to walk back down the street. The garbage truck then autonomously backs down the street, stopping when it reaches a trash can. The truck stays stopped until the human hits a button on the side of the truck to indicate that the trash can was emptied. Then the garage truck resumes driving in reverse until it reaches the next trash can.

Volvo expects its method will save time, and it could also allow some garbage trucks to operate with a single human.

So, if adopted, the technology would eliminate some jobs. Many garbage trucks are currently operated by small teams. Stenqvist said thee number of garbage men needed for a given truck would depend on the density of each neighborhood. Volvo expects to learn more during testing.

Volvo expects to discover environmental benefits as well, as autonomy allows for smoother acceleration and braking. Stenqvist expects better fuel consumption and less wear and tear on the truck.

The system may prove problematic on busy streets, as the truck will clash with the flow of traffic. For now, the garbage truck remains a research project, and adjustments may be made, according to Stenqvist.