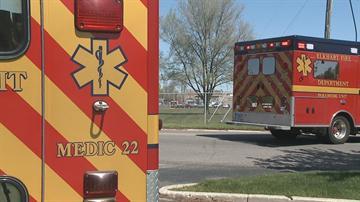 ELKHART, Ind. - Monday’s weather forecast called for a breezy day, but nobody was expecting the wind to take down power to thousands of people across Michiana.

At around 1:30 p.m. the Elkhart Police Department started receiving calls that power was out in the area around the intersection of State Road 19 and Bypass Road.  Police and emergency management crews quickly scrambled to control traffic at intersections where traffic lights went out.

For the Elkhart Fire Department, the concern was the loss of power to fans meant to cool 4,000 pounds of molten metal at Elkhart Brass Company on Beardsley Avenue.  Fire trucks lined the streets nearby as fire fighters waited to see if they’d be needed to help control the hot liquid metal.

"Came back from lunch and the electric was turned off and we didn't know why, called the electric company and they didn't know why so but then that's when all the fire trucks started showing up," explained Connie Anderson who works nearby and wasn’t concerned to see the fire crews. "Because they've been out here before for other things in the last few years but when the big, big trucks started showing up you knew something was wrong."

Representatives from Elkhart Brass said it is common procedure to have the fire department on stand-by during power outages until the furnaces can cool down and workers can move material safely.  Thankfully the fire fighters weren’t needed and power was restored around 3:45 in the afternoon.

The wind caused problems in South Bend as well; a large tree branch snapped and fell onto power lines near the intersection of Dunn Road and Willis Street.

"Just got done eating, got the deck of cards out, thought we'd play some two hand solitaire and watch the news and the lights went out…lights went out, TV went out," described Theresa Miltenberger, who lives on Dunn Road.  “As soon as the electric went out I knew it had to be the wind.”

Fortunately there were no reports of injuries as a result of Monday’s wind.  According to Indiana Michigan Power at one point nearly 2,000 people were without power across Michiana.  As of late Monday night most of the power had been restored.