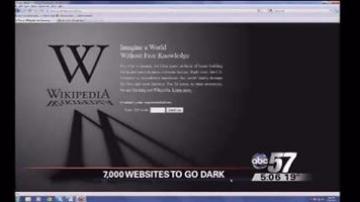 Some of the nation's most popular websites are shutting down.

Wikipedia.org is just one of 7,000 sites that are shutting down in protest of internet piracy legislation and the controversial bill, “Stop Online Piracy Act.”

The website appears normal at first, but when trying to search the site it literally goes black, and a simple message pops up reading "Imagine a World Without Free Knowledge."

Critics say it's a way to censor the internet. Along with Wikipedia, Mozilla and Craigslist are also on board.

Google stopped short of saying it would "go dark,” but they have changed the home page to show solidarity.