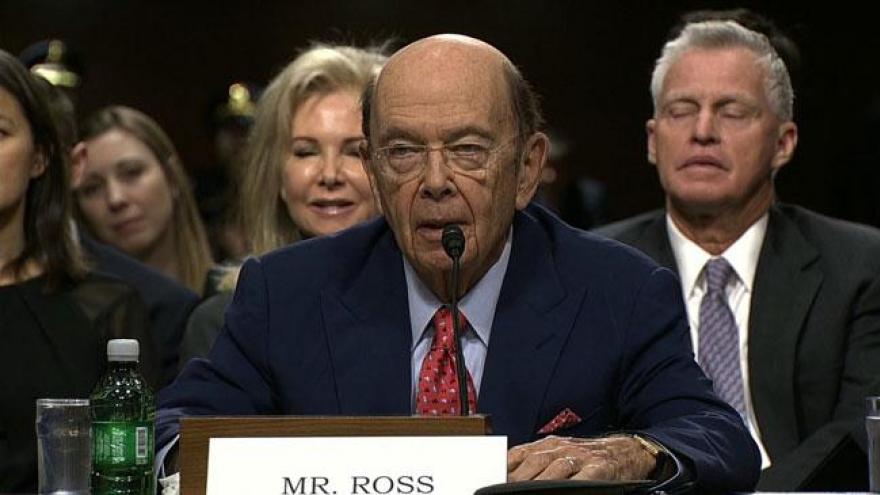 During his confirmation hearing on Wednesday, Ross described himself as "pro trade," but that he backs only "sensible trade."

"We should not put up with malicious trading activities, state-owned enterprises or subsidized production," Ross said.

Specifically, Ross pointed the finger at China, whom he called "the most protectionist country of very large countries."

Ross, who made a fortune as a turnaround artist that resurrected dying manufacturing businesses, said the U.S. should provide access to its vast market to "nations who agree to play by our standards of fair trade."

He argued that countries that don't "play by the rules" should "get punished -- and severely."

Trump has suggested tariffs as one way to retaliate and Ross seems to support that option. He said tariffs "play a role both as a negotiating tool and, if necessary, to punish offenders who don't play by the rules."

One way Trump has signaled he will fix trade is by renegotiating trade agreements, especially NAFTA, the free trade deal between the U.S., Canada and Mexico.

Ross repeated that NAFTA is "logically the first thing for us to deal with" and will be a "very, very early topic in this administration." Ross also said that "all aspects of NAFTA would be put on the table."

Many have warned that Trump tariffs risk a trade war. That's what happened during the Great Depression after the U.S. raised tariffs on thousands of goods with the Smoot-Hawley Act. Other nations retaliated and the global economy suffered.

"We can learn from history that that approach didn't work well...and it very likely will not work very well now," he said.

During the campaign, Trump repeatedly blamed China, as well as poorly-designed trade agreements, for the loss of manufacturing jobs in the Rust Belt that helped carry him to victory in November.

"We can't continue to allow China to rape our country," Trump said in May.

Ross has sharpened his rhetoric in recent months, after previously urging politicians to temper their anti-China comments. CNN's KFile reported this week about a 2007 speech from Ross, in which he expressed worry about the rise of a "protectionist monster" in the West and "mindless China bashing."

Ironically, China President Xi Jinping has recently sought to cast himself as a fierce defender of globalization. "Whether you like it or not, the global economy is the big ocean you cannot escape from," Xi said in a speech on Tuesday at the World Economic Forum in Davos.

When he nominated Ross as commerce secretary, Trump promised the billionaire will "stand up for American jobs." The president-elect praised Ross as not only a "champion of American manufacturing" for his efforts to save failing steel and auto businesses, but "one of the greatest negotiators I have ever met."

Ross has also shifted his position on the Trans-Pacific Partnership. As recently as last May, Ross supported TPP on TV and in 2015 he signed a pro-TPP letter. After the election, however, Ross called the controversial trade agreement a "horrible deal."

During the hearing, Ross explained that while he was initially "positive" about the benefits of TPP, he eventually came across inconsistencies. For instance, Ross said TPP would allow for more than 60% of the components that go into making cars to come from outside TPP countries and still enjoy member benefits.

"That didn't strike me as the world's best idea," Ross said.

Ross's fortune -- Forbes estimates his net worth at $2.5 billion -- and sprawling web of assets -- has raised concerns over potential conflicts of interest.

The billionaire filed paperwork in recent days indicating he has agreed to sell some, but not all, of his complex empire. If he's confirmed, Ross plans to step down from various companies and quickly sell many assets.

But Ross plans to hold on to nine investment vehicles that contain shipping, mortgage lending and real estate financing assets. Ross explained he will keep these assets "solely as a passive investor" and there is little chance he will be participating in matters affecting them.

During the hearing, Democratic Sen. Richard Blumenthal noted that this process was "enormously complex, challenging and costly" to Ross personally and suggested Trump should follow his lead. Trump has been criticized for declining to sell his stake in his business empire.

"You were able to do it. Why not the president?" Blumenthal asked.