Fire erupts as Californians hit with 2nd round of blackouts 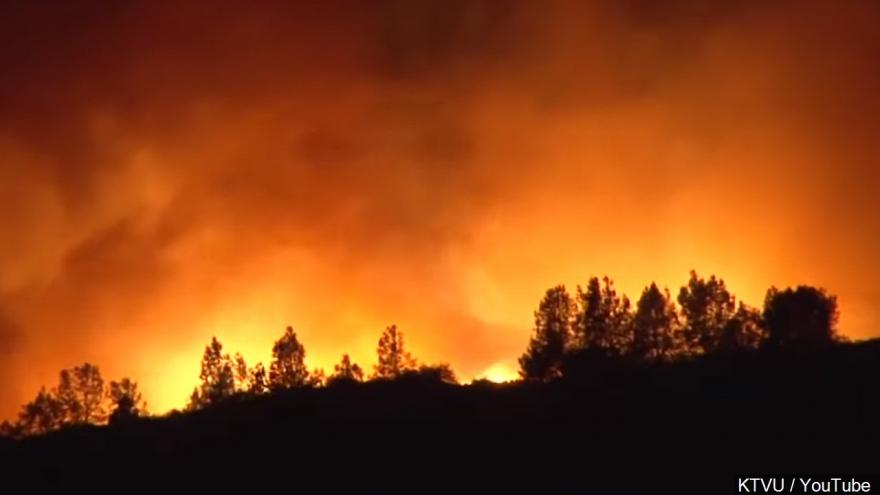 Authorities ordered the entire community of Geyserville to evacuate after the fire in the Sonoma County wine region north of San Francisco grew to more than 15 square miles. The town has about 900 residents and is a popular stop for wine country tourists.

The cause of the blaze wasn't immediately known, but wildfire risk was extremely high as humidity levels plunged and winds gusted up to 70 mph. An Associated Press photographer saw three homes destroyed in the Jimtown area. There were no immediate reports of any injuries.

The Pacific Gas & Electric Co. utility on Wednesday began rolling blackouts stretching from the Sierra foothills in the northeast to portions of the San Francisco Bay Area in a bid to keep the electrical grid from causing fires due to wind that can send power lines toppling, starting fires.

The blackouts impacted a half-million people — or nearly 180,000 customers — in 15 counties, and PG&E warned that a second round of outages could occur over the weekend when winds were forecast to return.

The San Diego Gas & Electric utility warned of power shutoffs to about 24,000 customers.

The utilities have said the blackouts are designed to keep winds that could gust to 60 mph (97 kph) or more from knocking branches into power lines or toppling them, sparking wildfires.

Electrical equipment was blamed for setting several fires in recent years that killed scores of people and burned thousands of homes.

The latest outage comes two weeks after PG&E shut down the power for several days to about 2 million people in northern and central California.

The current outages will last about 48 hours, the utility said. But its seven-day forecast shows a likelihood of another planned blackout across a much larger area. The timing wasn't clear, but it could start as early as Saturday, when even heavier winds are expected to move through.

"This could be the strongest wind event of the season, unfortunately," PG&E meteorologist Scott Strenfel said.

The small city of Calistoga, in the Napa Valley, known for its hot springs and wineries, was among those hit by Wednesday's outage.

"It's very frustrating," said Michael Dunsford, owner of the 18-room Calistoga Inn, which has rented two powerful generators for the month at a cost of $5,000. Like many, he felt the outages need to be better managed, better targeted and less expansive.

"Right now, we have no wind. Zero. I don't even see a single leaf blowing. Did they really have to cut the power right now?" he said, shortly after the lights went out and he revved up the generators. "When the wind picks up to 40 mph maybe that's a good time to close the power."

"They're not appreciating enough the impact this has on everybody," he said about PG&E.

Some of the frustration was being taken out on PG&E employees, the company's CEO said.

Johnson said a PG&E employee was the target of what appeared to be a deliberate attack in Glenn County. He said a projectile that may have come from a pellet gun hit the employee's front window. The employee wasn't hurt.

"There is no justification for this sort of violence," Johnson said. "Wherever you see crews they are there to help you."

Sonoma County Supervisor James Gore said PG&E was better this time about getting information to people who would be affected, but he was still astonished by the need to resort to largescale blackouts.

"I am a big believer in shutdowns to prevent fires. But the thing that erodes public trust is when it doesn't make sense," he said. "You say, 'God, I know if we can put a man on the moon ... we can manage a (power) grid.'"