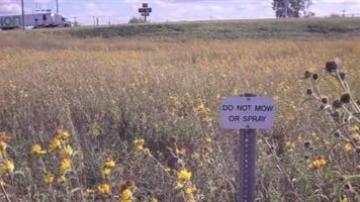 ST. JOSEPH COUNTY, Ind. -- In the spring, wild flowers provided a sea of colors along the US 20 bypass, but those same flowers could make the roads a little safer when there’s snow on the road.

In 2005, INDOT planted 230 acres of wild flowers in the medians along major state roads.

No matter how harsh our winter is, these flowers will act as a snow fence.

“Ultimately what you'll see in areas like this, is you'll see the snow that's normally blowing across the roads,” said Matt Deitchley, spokesman for INDOT LaPorte District. “During that time, this will help to prevent any of those roads from getting blown over, in those big snow events.”

In addition to beauty and winter safety, these flower fields help save tax payer dollars.

Prior to the flowers being here, the state had to mow these acres of land.  But these flowers don't require any upkeep.

INDOT says that so far, they've received nothing but positive feedback from South Bend residents.

“I wish they'd plant some more of them,” said Andrzejewski.

INDOT says this is just the beginning. There's talk of planting these wildflowers along the new US31 in 2014.