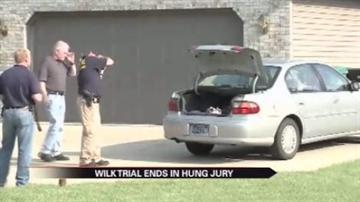 NEW CARSLILE, Ind. -- The mother accused of neglect in the death of her two sons walked away a free woman again Thursday night. A second jury could not come to a unanimous decision in Jacqueline Wilk's trial.

It was a brand new set of jurors,  but just like the last, they could not come to a unanimous decision.

The boys got into the trunk of her car on a hot day 2011 and died from hyperthermia.

Jurors say the proof that Wilk knowingly put her kids in danger just is not there. Tears were flowing in the courtroom as Jacqueline struggled to answer questions about the day that Dominic and Isaac were found.

Prosecutors called out her inconsistent stories—especially when it came to what she was doing when her kids were trapped in the locked trunk. But did she knowingly harm them? Jurors say they could not get past those three words: “Beyond reasonable doubt”.

"In my opinion, it was not clear cut, boom this is it!" explained juror Randy Clifton.

Wilk’s legal team says they are pleased with the verdict and ready for round three if the state chooses to re-try the case again.

"We thank the jury for their services in this incredibly difficult job particularly with this case, its one of the most important jobs in american justice." Said Brendan Lahey from the defense.

The state has until June 18 to decide if they want to retry Jacqueline Wilk.