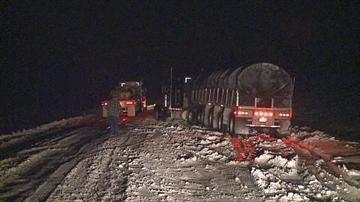 SHIPSHEWANA, Ind. – An icy U.S. 20 is slowing down big rig drivers who opted to avoid the toll road.

As the snow fell Tuesday night, plows tried to keep U.S. 20 clear between LaGrange and Shipshewana, but despite their best efforts, several semi tractor trailers found themselves sliding off the two lane highway.

Stuck on the side of the road, some tried to drive, drag, and pull themselves back onto the road. Others waited for a professional tow truck to get them back on track.

One driver lent his 25-foot logging chain to another driver who was stuck in the ditch. Using holes in the rim of the wheel, the drivers fashioned a makeshift tire-chain which let him get enough traction to drive out of the ditch.

At 9:30 p.m. nearly all on-duty LaGrange County Sheriff’s deputies were assisting motorists who had gotten themselves into trouble on the roads. Most of them outside city limits.

The towns of LaGrange, Howe and Shipshewana were all buttoned up tight by late evening Tuesday night. Few people were found on the roads in and around the communities.

A few horse-drawn buggies were out and about. Unlike cars and trucks, none were seen stuck on the side of the road.